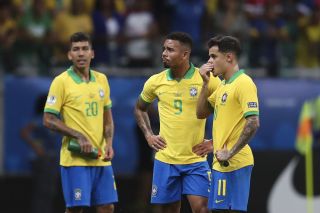 Brazil saw three goals disallowed by Video Assistant Review as they were held by Venezuela to a goalless draw in their Copa America clash.

The hosts thought Philippe Coutinho had finally gotten them the upper hand in the final minutes of the game, but his close-range effort was ruled out after VAR showed a handball by Roberto Firmino in the build-up.

The Liverpool forward had already found himself on the wrong end of a VAR decision, which saw an effort by Gabriel Jesus disallowed.

That came after Firmino had managed to find the net in the 38th minute – but the goal was chalked off after the referee ruled he had fouled in the process.

Without injured star Neymar, the hosts appeared to lack some of the finishing power they needed to really get the better of La Vinotinto’s impressive goalkeeper.

The Group A leaders were in possession for more than two thirds of the match, with nearly 20 attempts on goal.

But they were repeatedly frustrated – despite Tite bringing on Everton, Fernandinho and Gabriel Jesus in the second half.

Tite’s side started with a 3-0 opening-night victory over Bolivia as they look to claim their first Copa America crown since 2007.

That task was made all the more difficult when Paris St Germain forward Neymar was ruled out of the competition after injuring his ankle in a warm-up win over Qatar.