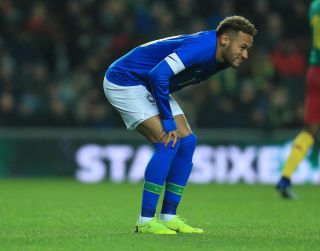 Brazil can overcome the loss of star man Neymar to claim the Copa America crown on home soil, according to former captain Cafu.

The Selecao open the tournament against Bolivia in Sao Paulo, with an expectant nation targeting victory in the South American showpiece event for the first time since 2007.

Head coach Tite, though, will be without Paris St Germain forward Neymar, who suffered ankle ligament damage in a friendly against Qatar, one of the competition’s two invited guest teams along with Japan.

Peru and Venezuela are Brazil’s other opponents in Group A, with the hosts aiming to plot safe passage all the way through to the final at the Maracana in Rio on July 7.

Cafu holds a record 142 Brazil caps and won the World Cup twice, captaining the side to victory in 2002.

The former right-back knows the weight of expectation on the Selecao, who also have concerns over Barcelona midfielder Arthur’s knee problem.

Cafu, though, believes Tite’s squad can pull together for the challenges ahead, with Chelsea winger Willian having been called up as a replacement for Neymar.

“Brazil loses a great player, one of the most important in the national team, which changes things tactically,” Cafu told reporters at a Copa America launch event in Brazil, as quoted by media outlet O Dia.

“Tite will have to build the team without him, but I believe that this will not prevent the selection of a team to play great games and that Brazil can win the title.”

Cafu added: “I think it’s going to be a different kind of Copa America than any other, with big teams.”

The Selecao beat Honduras 7-0 in their final warm-up match, with Everton forward Richarlison among the scorers.

Brazil have won the Copa America on all of the four previous occasions they have been hosts – the last time in 1989.

Bolivia may be set for the role of underdogs at the Estadio do Morumbi on Friday but head coach Eduardo Villegas is determined to make the most of their opportunity in the spotlight.

“It’s a privilege to face Brazil, the same we had against France (in a recent friendly), we want to do well,” Villegas said, quoted on the Bolivian Football Federation website.

“We know that we are a little bit below the rest, but we know that it can be levelled.

“It’s a question of attitude, of fight, desire – and that is what we are going to show in the team.”