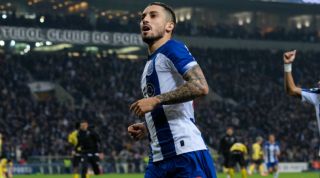 Porto have named their price for Alex Telles as Chelsea hunt for a Marcos Alonso replacement.

Chelsea are long-term admirers of Telles and have made previous attempts to sign the player, according to A Bola.

The Brazilian full-back would likely be a replacement for Marcos Alonso, who is reportedly seeking an exit from Stamford Bridge.

Alonso has been linked with a move back to Itlay, having made the switch to Chelsea from Fiorentina in 2016.

The Spanish left-back has been linked with a move to Inter Milan which would see him team up with former Blues boss Antonio Conte.

Conte was the man who brought Alonso to Chelsea in the first place and used him as an integral part pf his wing-back orientated system.

If Chelsea are to sign Telles, it's understood that they will have to pay the full £40m buy-out clause in his contract.

Porto are keen to make a decent return on the player they signed from Galatasaray for £5.8m.

Chelsea may face competition for Telles from Eredevise holders Ajax, who are also believed to be keen.

The battle for the 27-year-old's signature could come from closer to home, however, as other Premier League sides are thought to be interested.

Leicester City are said to be the most likely to rival Chelsea in their pursuit of Telles.

The Foxes are placed above Chelsea in the English top-flight as things stand, with both clubs looking likely to qualify for the Champions League.