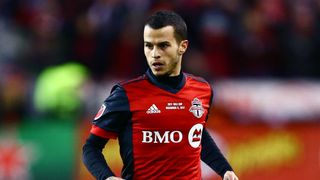 MLS Cup champions Toronto suffered a 3-2 loss in the second leg in Mexico, but it was enough to get through on away goals after a 4-4 draw on aggregate.

Holding a 2-1 lead from the home leg, Toronto's advantage was extended when Rafael Carioca turned a Sebastian Giovinco pass into his own net in the 64th minute.

Eduardo Vargas scored a much-needed goal for the hosts just five minutes later, but their chances took a blow thanks to a moment of Giovinco brilliance.

The Italian curled a wonderful 30-yard free-kick into the top corner and the tie appeared over.

Tigres – runners-up the past two seasons – continued to fight as Andre-Pierre Gignac struck twice in the closing stages, but the result was enough for Toronto to advance.

Mexican clubs have won the past 12 editions of the tournament, but Tijuana were also eliminated.

The Red Bulls cruised into the last four 5-1 on aggregate thanks to a 3-1 second-leg victory.

Luis Mendoza struck in the 10th minute for Tijuana, but Tyler Adams tapped in an equaliser for New York just before the half-hour mark.

Tijuana's hopes were dashed as Bradley Wright-Phillips set up Marc Rzatkowski and Alejandro Romero in the second half.