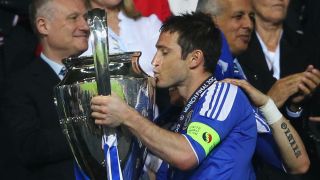 The LaLiga giants became the first club to win the tournament in consecutive years with their Cardiff triumph in June, underlining their status as Europe's elite side.

But Chelsea legend Lampard wants to see his former club, along with Liverpool, Tottenham and the two Manchester rivals, up their game, with the former England international expecting to see one or two of them in the last four.

"Real Madrid are the favourites, from what they did against Man United [in the UEFA Super Cup] and what they did in recent seasons, they have superstars in the team," Lampard, who won the competition in 2012, told Goal.

"We know the main one, but even against Manchester United in the Super Cup, with Cristiano Ronaldo on the bench, the rotation in the centre of passing and movement proved the benchmark.

"Everyone is playing catch-up. I do think Chelsea have as good a chance as any out of the English clubs, alongside Manchester City. They have a big squad too and a lot of European-style players who may flourish on the Champions League platform.

ICYMI - We've been drawn in Group C of the Champions League, alongside Atletico Madrid, AS Roma and Qarabag... August 25, 2017

"I expect the English teams to have one or two in the semi-final. Definitely, it is time to see an English club compete. There are no excuses for me. Christmas, having no break? Physical league? Not good enough.

"We invest enough in football, we are lucky to have a huge investment in the league because it is so popular. Clubs have brought in players from all over the world, even lesser clubs.

"If you get beaten in the Champions League, then that's because you have been beaten by a better team. It is as simple as that. Unfortunately, for the English teams, the real best teams have been a Barcelona, Real Madrid and Bayern Munich for a time."

Spurs were handed the toughest assignment in Thursday's draw, pitted against Madrid, Borussia Dortmund and APOEL.