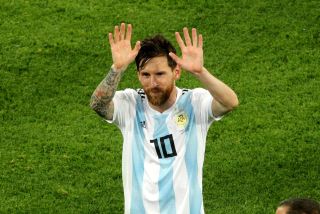 Lionel Messi’s international exile is over after the Barcelona star was named in the latest Argentina squad.

The five-time Ballon d’Or winner has been called up by new La Albiceleste boss Lionel Scaloni for the upcoming international friendly matches against Venezuela and Morocco.

Messi has not played for his country since the 2018 World Cup in Russia where Argentina, then managed by Jorge Sampaoli, lost 4-3 to eventual winners France in the competition’s last 16.

Having missed six games, however, the 31-year-old – Argentina’s all-time record goalscorer – has returned with the Copa America in Brazil in sight this summer.

The Copa America holds special significance for Messi, having played in the tournament four times and been a losing finalist on three occasions.

This month’s friendlies are one of the final opportunities that Scaloni will have his squad together to prepare for the Copa America. Argentina play Venezuela at Atletico Madrid’s Wanda Metropolitano stadium on March 23 before facing Morocco in Tangiers three days later.

Premier League strikers Sergio Aguero (Manchester City) and Gonzalo Higuain (Chelsea) have been left out of the squad.