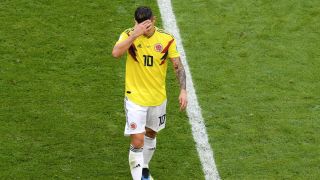 Radamel Falcao and David Ospina echoed the sentiments of a nation in hoping Colombia team-mate James Rodriguez makes a swift recovery from injury.

James started the game against Senegal in Samara on Thursday, but departed in disconsolate fashion after only half an hour, seemingly with a muscular issue.

In his post-match media conference, head coach Jose Pekerman was unable to confirm if it was a recurrence of the calf problem that saw James start on the bench against Japan in the Group H opener.

Yerry Mina headed the only goal of the game as Colombia topped the group to reach the World Cup last 16, where they will play England in Moscow on Tuesday, and Ospina hopes to see James back in action quickly.

"We hope that James is not very serious and that he can be with us as soon as possible for what he means," the Arsenal goalkeeper told reporters.

"We realise that all the teams have very good things, excellent players. We think about our work, doing things well and being able to keep moving forward.

"We keep thinking big, we follow step by step and now comes a complicated stage.

"In 2014 everything was very beautiful. In this World Cup we have had to go through difficult times but this selection can face these type of matches.

"That tranquillity must always be shown with the ambition to go ahead, to look for matches. Colombia has performed at the height of each match."

"Let's hope what happens today and tomorrow will be analysed more calmly," added Falcao, while Mina knows how important the 2014 Golden Boot winner is to the country as a whole.

"Unfortunately he had to leave the field ahead of time," the Barcelona defender said. "Now we have to help him to recover in the best way because he is a player who gives Colombia great joy."