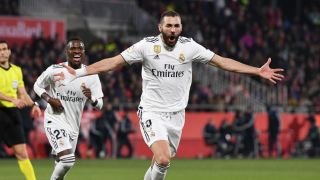 You're going to want to find a Real Madrid live stream, as the fight for the La Liga crown really begins to hot up...

Zinedine Zidane's side are chasing their first title since the Los Blancos legend returned to the helm. Barcelona have stuttered of late, but you can never rule out a side that boasts the talents of Messi and co. This looks like a straight fight for the top spot - who's your money on?

Kick-off is at 9pm GMT, with the game being shown on La Liga TV in the UK. See below for watching details where you are:

SEE ALSO: Premier League live stream best VPN: how to watch every game from anywhere in the world

How to watch La Liga outside your country

If you’re out of the country, your domestic on-demand services won’t work – the broadcaster knows exactly where you are from your IP address. Your access to the game will be automatically blocked, which is annoying if you’ve paid a subscription fee and don't want to use an illegal, buffering stream that makes you miss another Isco nutmeg. And that's where we recommend ExpressVPN (more on which below).

How to watch a La live stream in the UK

La Liga is broadcast on La Liga TV on Sky in the UK. Sky subscribers will have free access to all La Liga games for the remainder of the season.

If you want to watch the La Ligain the US and Canada, you can tune into BeIn Sports.

How to watch a La Liga live stream for European subscribers

YouTube will be showing La Liga in a number of European and Asian countries, including Armenia, Azerbaijan, Belarus, Estonia, Georgia, Kazakhstan and Lithuania.