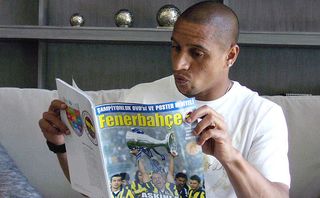 Brazilian legend Roberto Carlos has told FourFourTwo that “everything was agreed” for a move to Chelsea in 2007 – only for a contract clause to scupper the switch.

Carlos had come to the end of an 11-year spell with Real Madrid when a transfer to Stamford Bridge became a possibility, after over 500 appearances for Los Blancos and seven major trophy wins.

However, as the former left-back explains in the July 2020 issue of FourFourTwo – a Brazil special out in shops now and available to order online with free delivery – a contractual niggle meant he joined Fenerbahce instead and never played in the Premier League.

“Everything was agreed with Chelsea, but there was a contractual clause they really wanted and I didn’t,” he told FFT. “That’s the only reason I didn’t play in England.

“I had to play a certain number of matches in a row to get my contract renewed later on – it was normally between 12 and 15 games, but as I wasn’t a boy any more, I was concerned about picking up injuries and not being able to reach that number.

“I was proud of Chelsea’s interest, though. I had a meeting with Roman Abramovich, and we had a true and sincere conversation. Actually, I already knew Roman, because as a Real Madrid player you come across club presidents and owners all around the world. It would have been more or less what Cristiano Ronaldo did a couple of years ago, choosing a brand new experience after winning everything at Real.”

Carlos would have been competing with a peak Ashley Cole in west London, but the Selecao icon says such a battle would not have fazed him.

“Cole was going through a wonderful period of his career, indeed – but I never thought that way, like I was competing with someone else for a place in the team,” he explained.

“I did what I thought was best for the team and never aimed to be the main man. That’s not my style.”

NOW TRY Quiz! Can you name the Brazilians with 20+ Premier League appearances?