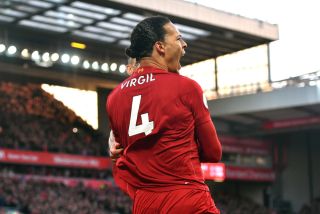 Liverpool defender Virgil Van Dijk insists he is not losing any sleep over their lack of clean sheets as they continue to lead the way at the top of the Premier League.

The 5-2 Merseyside derby win over Everton maintained an eight-point lead over Leicester but meant they have yet to have a shut-out in all 12 matches at Anfield this season.

On only three occasions have they prevented opponents scoring: at Burnley and Sheffield United in the Premier League and League One MK Dons in the Carabao Cup.

“It doesn’t really matter but no one wants to concede goals even if you win the game,” said Van Dijk.

“But I am not going to go to bed thinking ‘Oh s**t’ we conceded a goal. It is all about the team winning games.

“We want to win in the best way possible and obviously that is by not conceding but if we win it with conceding then everyone is still happy.

“We are in a good situation we can’t deny that but we are not there yet. We never are satisfied, especially when the season is not even halfway.

“We want to keep going and focus on the games ahead of us. So from now we will recover from this and be happy and fully prepare for Bournemouth at the weekend.”

Manager Jurgen Klopp knows he now has plenty of options for the trip to the south coast after making five changes against Everton, including leaving the likes of Mohamed Salah, Roberto Firmino, Jordan Henderson and Alex Oxlade-Chamberlain on the bench.

Squad management will be important for the Reds boss if they are to maintain their advantage over a busy December which also sees them fly to Qatar for the Club World Cup.

The fact Divock Origi and Xherdan Shaqiri came in and both scored and the overall performance was not affected by the changes was a huge boost for Klopp.

“The thing is we have to find a way to win every game we play whether it is with different players or different tactics we are always trying to find a way,” added Van Dijk.

“The players who came into the team don’t play regularly at all. Look at Divock, Shaqiri, they did fantastic, we played Adam (Lallana), Milly (James Milner), everyone is contributing and we need everyone.

“That is the key message and it is good. The season is very long, this month is very long – January as well – so the manager makes the decisions at the end of the day but we need everyone to be ready.

“We have a big squad and everyone is part of what is going on at the moment. Everyone is happy with the situation we are in.

“And everyone is also feeling responsible as well, ready to play or if you are on the bench.

“Everyone is part of the success we have and that is the message to everyone and so far, so good.”