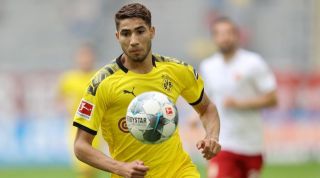 The Moroccan has been on loan from Real Madrid at Signal Iduna Park since 2018.

And AS reports that the German champions are desperate to secure his services this summer, once the wing-back returns to his parent club.

That form has attracted interest from the likes of United and Inter Milan, but Bayern are said to be willing to spend big to land his signature.

Real are likely to demand around €60 million (£53.5m) for the 21-year-old, who has another two years left to run on his Bernabeu deal.

Bayern are ready to offer the youngster a salary worth €6-7m per year after tax, a significant increase on his current earnings.

Additionally, Hakimi is said to be unsure about a return to Madrid, where he could be reduced to a role as Dani Carvajal’s back-up.

The player would like to stay in Germany, where he has settled quickly, and in Bavaria he could become the first-choice right-back ahead of Benjamin Pavard.

A Dortmund stay remains a distant possibility, due to the difficulties the club is likely to encounter in financially competing with the likes of Bayern, United or Inter.

One option would be to further extend Hakimi's loan spell, but Real Madrid and the player are both understood to be against the idea.