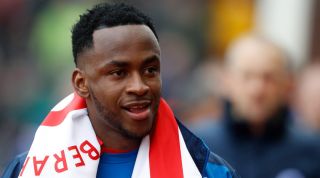 Even the Premier League’s most potent strikers can have their dry spells. Gabriel Jesus, who netted 13 times in 29 appearances during Manchester City’s title-winning campaign last season, is currently on 11 games without a goal.

Even the reliable Eden Hazard hasn’t found the net since early October. But they all still have a long way to go before they join the Prem’s all-time goal droughts. Here’s a look at 10 top-flight attackers who at one time or another couldn’t hit a barn door with a banjo.

Jeremie Aliadiere scored his first Premier League goal for Arsenal in a 5-2 win over West Brom in 2002 but had to wait a further five years for his second. Indeed, the Frenchman didn’t hit the back of the net again during his four full seasons with the Gunners, nor his seven-game loan spell with West Ham.

The Clairefontaine academy graduate, currently plying his trade with Ligue 2 side Lorient, eventually added to his league tally while playing for Middlesbrough at Old Trafford in 2007. Not that his first goal in 39 games mattered too much; the Teesiders still ended up losing 4-1.

Paul Stewart looked like becoming an Anfield hero when he netted the winner against Sheffield United on his Anfield debut in 1992. But in fact he never scored another Premier League goal for the Reds again.

Following a four-season stint plagued by injuries and inconsistent form, the three-time England international was shipped off to a Division One Sunderland. Stewart quickly became a vital part of their promotion-winning side but once again struggled to make much of an impact in the top flight.

In fact, it took him until October to score a belated second Premier League goal (in a 1-0 win over Aston Villa) and his season tally of four wasn’t enough to save the Wearsiders from relegation.

Diouf also began his career with Liverpool promisingly, netting twice on his 2002 Anfield debut in a 3-0 win over Southampton. But again, such scoring prowess proved to be a rarity and fans had to wait another 19 games for another (and final) league goal for their side from the hot-headed Senegalese.

That came in a 2-0 win over Bolton, the team that Diouf would later join following a nightmare second season with the Reds in which he didn’t score at all. By the time he bagged the Wanderers’ opening goal during their 2004 2-1 win against Newcastle, he’d equalled Stewart’s 40-game drought.

The holy trinity of forwards who went 40 Premier League games without a goal is completed by none other than Iain Dowie. The Northern Irish international started his second spell with West Ham respectably enough, netting eight times in his first full season with the club.

However after scoring a brace in a 4-2 win over Manchester City in 1996, the striker never bothered the Premier League scoresheet again. And he had plenty of opportunities to do so. Dowie made 23 appearances during the Hammers 1996/97 campaign and a further 12 in the following season before being offloaded to QPR.

Perhaps it was the pressure of competing with Teddy Sheringham and Jurgen Klinsmann for a regular place in the Tottenham line-up of the mid-1990s. Or perhaps he was still haunted by that iconic miss at Villa Park. Ronny Rosenthal never really got going during his three-year spell at White Hart Lane.

The Israeli striker failed to score at all in his first full Premier League season there. And after netting an equaliser against West Ham in March 1995, he took a full two years to further add to his league tally – a consolation goal in Spurs’ 4-2 defeat away to Derby County.

You probably wouldn’t expect a man who became Manchester United’s first player to score 20 top-flight goals in a season since George Best to make such a list. But Brian McClair, who formed a formidable partnership with Mark Hughes during the Red Devils’ early ‘90s ascent to greatness, failed to find the net during his final 45 Premier League games.

To be fair, the Scottish international was very much a fringe player at Old Trafford during his latter-day barren spell, rarely getting more than the final 15 minutes on the pitch. And he still ended up winning a further two Premier League winners medals for his efforts.

Richard Cresswell made 67 appearances in the Premier League during his stints with Sheffield Wednesday, Leicester and Stoke but only ever found the net twice. And both of those came during his early years with the Owls.

Following his consolation strike against West Ham in 2000, the journeyman suffered a 45-game goalless streak which occurred across four seasons and no less than 10 calendar years. Cresswell was far more of a threat outside the top flight, bagging 119 goals for the likes of York, Preston and the steel city’s other famous club, Sheffield United.

The only goal drought on this list which extended in 2018, Saido Berahino’s dry spell has already passed the two-year mark, although he is currently plying his trade in the Championship. Stoke’s relegation this summer stopped his Premier League barren run just two games shy of the half-century milestone.

All but four of Berahino’s 48 scoreless games have been with Stoke, the club who splashed out £12m for the Burundi international in 2017. In fact, Berahino took all of 913 days to score his first goal for the Potters in any competition, finally breaking his duck in the second-round EFL Cup victory over Huddersfield in August this year.

Luis Boa Morte went the entire 2007/08 and 2008/09 seasons without finding the net for West Ham despite making it on to the pitch 54 times. The Portuguese international also failed to score in his final two games of the 2006/07 season, meaning his number of consecutive goalless Premier League matches once stood at a (then) record-breaking 56.

Boa Morte finally got the chance to celebrate when he gave the Hammers a brief lead against Manchester City in their last encounter of the 2009/10 season. But this proved to be a false dawn. The striker went on to suffer another lengthy goal drought (22 games) the following season before leaving for the Greek second tier.

Although Berahino may give it a good go if he returns to the top division, it seems unlikely that anyone in today’s results-driven, money-hungry game will ever surpass Alan Smith’s astonishing record of 70 Premier League games without a goal.

The bleach-blond attacker famously struggled after moving to Leeds from Manchester United in the mid-2000s, netting just six times in the league his first season and only once in his second. That particular goal against Charlton in 2005 would prove to be Smith’s last ever in the Premier League.

A positional switch into midfield admittedly didn’t help, but given his previous position, it's remarkable how little he troubled the net. Not only did Smith fire blanks in his remaining 18 games for the Red Devils, he also failed to score in his 52 top-flight appearances for Newcastle.