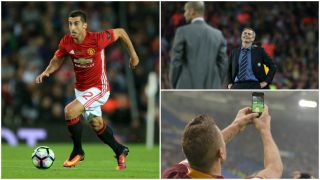 1. Someone to get sent off for dissent on the opening day

Jamie Vardy and Diego Costa both felt the FA's wrath after gobbing off at officials last season, and now the Premier League has announced a crackdown for the new campaign.

Yellow cards will be (apparently) dished out to players who “show visibly disrespectful behaviour to any match official”, “respond aggressively to decisions”, “confront an official face-to-face” or “run towards an official to contest a decision”.

Reds go out to those using “offensive, insulting or abusive language and/or gestures” towards refs. Basically: go near them at your peril. You can change the punishment guidelines, but can you change the players? We think not. Expect some early baths. - JB

There'll be no repeat of Leicester's heroics this season - the big boys's spending will tell and there's a chance that United, City, Chelsea and Arsenal will make up the top four with Liverpool pushing too due to a big outlay on Mane, Wijnaldum and others. Leicester and Spurs to fall back as money talks. - GM

3. John Terry to be reborn under Conte

For a while last season is looked like Terry's 21-year association with Chelsea might be over. The man himself announced that a new contract wasn't forthcoming, until he finally landed a one-year deal in May (albeit for a "different role").

New boss Antonio Conte insisted he was still firmly in his playing plans, though – so much so that he's still captain, and has featured prominently in pre-season.

With no new defensive reinforcements so far this summer, there's no reason why Terry will be reduced to a peripheral role, and should thrive under an exceptional organiser who values his experience. - JB

Chelsea’s new Italian boss has a weave so good, it rivals Mark Clattenburg’s at the summit of football’s finest toupees. Google a mid-90s’ Conte at Juventus if you don’t believe us. Exactly. Now, the wig stood up well to the effects of Italian celebrations during Euro 2016 – better than his nose anyway, after a swift bosh celebrating Emanuele Giachherini’s goal against Belgium – but what will happen when a full Prem season comes a-knocking and a-pulling at your lovingly stitched follicles? It’s a stressful business managing in England. Just ask Brian McDermott. - AM

It's unlikely you'll see the Frenchman troubling Sergio Aguero & Co. for the Golden Boot, but he's all set for his best goalscoring season yet with Arsenal.

Giroud isn't a dead-eyed finisher, and frustrates the Emirates faithful like no other player at times, but unless Arsene Wenger lands Alexandre Lacazette he's almost guaranteed to start in every game and will come into the campaign off the back of a solid Euro 2016 with France.

16 goals last season didn't tell the whole story – he'd bagged 12 of those by mid-January, then didn't score his other four until the final two games of the season. Confidence is clearly an issue for the 6ft 4in mirror-dweller, and if he starts sharply then there's a good chance he'll pick up where he left off. - JB

6. Henrikh Mkhitaryan to prove himself as the signing of the summer

Pogba? Zlatan? True, one is the most expensive signing in the history of the world (and the world’s been around a really long time, if you believe the scientists), while the other is, well, Zlatan.

Less has been said about Henrikh Mkhitaryan, but that could change. The 27-year-old is the first Armenian to play in the Premier League and could have a major role to play in Jose Mourinho’s plan to make Manchester United rather more dynamic than Louis van Gaal’s ‘keep passing until the opposition fall asleep’ tactics.

Mkhitaryan was one of the best players in the Bundesliga last season, scoring 23 goals from midfield, and will steal plenty of headlines from Pogba and Ibrahimovic if he gets anywhere near that figure in the Premier League this term. - CF

7. Pep to finish above Jose

It's the season's most compelling storyline.

Jose Mourinho and Pep Guardiola could scarcely have taken different paths to management, but they go back a long way – over a decade-and-a-half, in fact, from their days together at Barcelona.

Both bosses have big jobs on their hands to transform failing giants but, in our minds at least, Pep has the least to do with a fearsome attack at his disposal. Jose's got Ibra, Paul Pogba and Henrikh Mkhitaryan, but it's going to take time to get that attacking unit oiled. - JB

8. A Premier League player to live tweet after scoring a goal

The Premier League and the world of multimedia may appear to go hand in hand, but its footballers are slacking. We’ve had Facundo Sava whipping a mask out of his socks for goal celebrations, but until now not one Premier League striker has embraced new technology while actually playing a game. Bunch of Luddites.

It’s time to put that right. It’s a wonder it hasn’t happened already, but surely this is the season when at least one player sticks the ball in the onion bag, produces a mobile phone and promptly tweets a groupie celebration picture alongside the simple word ‘GOAL!’, live from the pitch. Just think of the retweets, lads. It’s a viral certainty.

Francesco Totti went close by taking a pitchside selfie after scoring for Roma 18 months ago, but he ruined it by failing to put it on social media during the game itself. Apparently he was ‘concentrating on trying to win the match’, or some other feeble excuse. Either that or he couldn’t get on the wifi. - CF

Well, thank god that’s over. It took most of the summer, but now the French midfielder is a Manchester United player. Again. Why the hold up, we hear you pre-pubescent “announce Pogba” teens squeal? If Twitter, Snapchat and Instagram are anything to go by, creating a bucket load of #content around the world’s most expensive player’s arrival and Stormzy, who the Internet tells us is a Grime artist. This means he’s either a rapper or in need of a good wash. And what for? To be gazumped by a photo of the United kit ladies with Pogba in front of the washing machines. Come Sunday lunchtime on the South Coast, a bit of Pogba kicking a football around might actually break out. - AM

Manchester City’s latest recruit is a wonderfully smooth footballer. Great touch, excellent vision, the perfect modern centre-back to initiate moves from deep. One thing that Stones isn’t quite so good at, is defending, the nuts and bolts of stopping the opposition from scoring. Pep Guardiola teams tend to have good defensive records, yet this is more a by-product of a possession obsession and constant training sessions on positional play to find space than any specific defensive mindset.  - AM

Listen, Eddie, we loved Bournemouth last season. Despite losing the impressive Callum Wilson to an unfortunate injury early on, the Cherries’ verve was refreshing. You looked the part, too, assuming the part is a tracksuit-wearing choirboy who’s mum has bought him an iWatch for his birthday. Now it’s time for an upgrade, that slab of Apple around your wrist is sooooo 2015-16. They’re an overpriced waste of time. Buy a Rolex and roll with it like the Premier League elite. - AM

Neil Warnock has been appointed to launch TalkTalk TV’s new Sky Sports Season Pass. With no long-term commitment, TalkTalk customers have access to six Sky Sports channels, from as little as £11 a month. To find out more visit: TalkTalk.co.uk