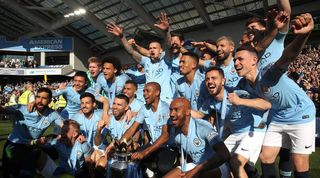 The Premier League fixtures for the 2019/20 season were released on Thursday.

Here are five games from August to May to look out for – and put in your diaries right now.

Pep Guardiola’s back-to-back Premier League champions renew their rivalry with Jurgen Klopp’s European champions in their first meeting since landing their latest respective silverware. Liverpool pushed City all the way in an epic title race last season and have home advantage as they bid to draw first blood in pursuit of their first domestic crown in 30 years. Guardiola’s side will be equally determined to maintain the edge after beating the Reds 2-1 in their previous encounter in January as they bid for a domestic league hat-trick.

Liverpool were crowned European champions for a sixth time after beating Tottenham in Madrid 12 days ago and the north London side will want revenge. The pair are sure to challenge for a top-four finish in the 2019-20 campaign and this Anfield clash will be an indicator of their title credentials. The Reds won both league matches 2-1 last season and have 10 wins and only one defeat in their last 15 meetings in all competitions.

Chelsea secured a comprehensive 4-1 victory against Arsenal in this summer’s other all-English European final to lift the Europa League trophy for a second time. If the Gunners can avenge their painful defeat in Baku in their first meeting since, it might go a little way to appeasing those fans who are growing ever louder in their criticism of the club’s inability to compete with the top four. Champions League qualification is a minimum requirement for both clubs, who each won their respective home game in this fixture last season.

Sheffield United boss Chris Wilder joined an exclusive group of managers to have won promotion to each of the top four divisions in England when his side pipped Leeds to a second-placed finish in the Sky Bet Championship. Without a Yorkshire derby next season – the Blades’ first in the top flight since 2006-07 – their fans will relish the visit of Manchester United, who were their opponents at Bramall Lane in both clubs’ first Premier League fixture on the opening day of the 1992-93 season.

Villa Park is expected to be sold out for the club’s first home game back in the top flight, although some fans may have preferred more illustrious opponents to mark the occasion. Dean Smith’s side sat 13th in the Championship at the start of March, but stormed to promotion via their play-off final win against Derby after ending the regular season with 11 wins in their last 12 matches including 10 in a row. Villa spent three seasons in the second tier after finishing rock-bottom of the Premier League, with just 17 points, at the end of 2015-16, but lifelong fan Smith guided them back after just over seven months in charge.

Quiz! Can you name all 33 England players to take a shootout penalty in a competitive tournament?