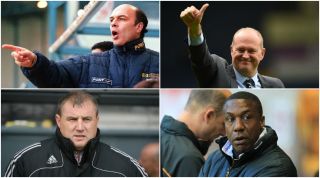 “I want this to be my ticket to the dreams,” garbled a smiling Christian Gross to the assembled press, waving his Heathrow train ticket in front of his face.

The former Grasshopper manager had just touched down from Zurich – late – an early indicator of the bumbling football show in north London in the 1997/98 season.

While rivals Arsenal, under the stewardship of their own newly arrived unknown foreign import, swept all before them en route to the double, Spurs limped to a heavy-legged 14th-placed finish, surviving in the Premier League by just four points after a season dogged by clueless management and Gross’s uneasy relationship with his team and the media.

Statistically the Swiss manager’s time at White Hart Lane was little worse than average, as he racked up a points total that was only two down on the previous season, and dragged the side a couple of places up the league table following his appointment in November.

But the devil was in the detail for Gross, his clumsy demeanour making him a sitting duck for the press who never forgot his clownish introduction the day he emerged tardy from the Victoria Line. By August 1998 he was travelling west back to Heathrow, relieved from his torment as Spurs chairman Alan Sugar complained that the media had never given him a fair shake.

To blame Alan Shearer for Newcastle's relegation in 2009 would be wilful and contrived; four other men held the reins that season, some so briefly as to be excused culpability, others with time enough to utterly destabilise and derail the club.

But whereas Kevin Keegan and Joe Kinnear were long departed by May and caretakers Chris Hughton and Colin Calderwood had receded to their backroom roles, former skipper Shearer was at the helm when the club crossed the line – albeit the dotted one at the bottom of the table.

Newcastle’s favourite son actually managed five points from his eight games in charge, including a 3-1 win over fellow strugglers Middlesbrough, and under different circumstances Shearer’s reputation at the club would likely have been enough to guarantee the patience of both club and fans.

By his appointment in April, however, St James’ Park was in an effective state of emergency, with little room for error or sentiment. Unfortunately for the Toon Army there was an abundance of both, as a woeful team were ploughed into the Championship by a local hero who proved to be the wrong man at the wrong time.

Another manager who took the flack for somebody else’s mess, Paul Jewell’s appointment as Derby boss a third of the way through what was shaping up to be a tricky return to the Premier League seemed like sound management by the Rams board at the time.

The Rams had just six points from their first 14 matches when Billy Davies was sacked in November, by no means an irretrievable mess but certainly a job for someone who knew how to make Premier League players from Championship stock. Jewell had kept Bradford and Wigan in the top flight in recent seasons, and his credentials in a relegation scrap were impeccable.

The acceleration of their collapse under Jewell, though, was startling. By the week of Christmas 2008 they had scored six Premier League goals and conceded 39; they shipped six goals on four occasions and five on a further two, with the majority of the season’s heaviest defeats coming after Jewell took the helm.

West Brom didn’t have a single player red carded in any competition during the 2013/14 season. But this singular exercise in collective discipline aside, those sorry nine months still linger around The Hawthorns as memories of a futile waste of energy.

Coming off the back of an 8th-placed finish, Albion’s highest in a generation, things looked promising in the summer of 2013 for a club finally free of the weight that spent most of the 2000s yanking them back towards the Championship.

But much of the optimism had been fuelled by serendipity and sheer dumb luck. An unusual spread of results among the league’s bottom 13 clubs meant the Baggies finished 8th despite having collected more than half of their points by November 24, before their form under Steve Clarke totally deserted them.

This continued into the following season, but anomalies or not, there can be little forgiveness for any manager who oversees such a spectacular plummet in league places as Pepe Mel.

From the confusion that preceded his appointment in January – Mel returned to Seville after the club told him he wouldn’t be able to bring his backroom staff – the Spaniard looked dithering, lost and worryingly languid, collected just 15 points as the Baggies finished 17th.

It was a miserable 16 games for Tony Adams and Portsmouth when the former England skipper briefly took charge after the departure of Harry Redknapp to Tottenham in 2008.

By then the club were heading towards financial oblivion, and although the combined efforts of Redknapp, Adams and caretaker Paul Hart were enough to steer Pompey to a seven-point cushion above the bottom three, the relegation wolves came howling the following season.

But with just 10 points racked up during a miserable spell in charge, it’s Adams’s appointment which best represents the chaos that the Fratton Park administration inflicted upon the club.

In February 2012, a few days after Wolves had been thumped 5-1 in the Black Country derby by West Brom and manager Mick McCarthy had been relieved of his burdens, Steve Bruce returned home from a meeting at Mollineux and told his wife that he was going back to work.

David Moyes: I'd have approached United differently if I knew I only had 10 months

Later that week the club confirmed that caretaker Terry Connor was to be given the job on a full-time basis until the end of the season. Neither Bruce nor the Wolves fans were ever given a reason why the journeyman relegation-scrapper was overlooked in favour of a man with no experience of managing a club.

And so, as Wolves – winless under Connor – slid miserably into the Championship, the question lingered awkwardly around Mollineux. It proved a further stain to go alongside one of the Premier League’s poorest ever points totals.