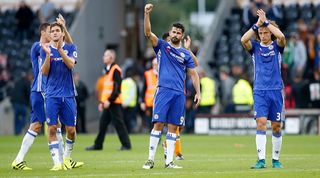 The title is heading down the King's Road. Middlesbrough, who have flirted with relegation all season long, were finally put out of their misery on Monday evening as Chelsea all but guaranteed a fifth Premier League title with a comprehensive 3-0 victory at Stamford Bridge.

Liverpool were standout performers on the opening weekend with a high-energy 4-3 victory at the Emirates Stadium. However, Jurgen Klopp's juggernaut was halted in their very next fixture against bottom-half Burnley, who provided the blueprint for success against the Reds: Sean Dyche's men were happy to concede possession and defend narrowly inside their own half, before breaking at speed and exploiting their opponents' high full-backs. With it, the Reds set an unwanted Premier League record for the most possession (80.6%) in defeat.

Liverpool have since dropped eight points to sides in the bottom three, and have also lost to Leicester, Crystal Palace and Bournemouth - each of whom were entertaining thoughts of a relegation dogfight at the time of facing them.

Klopp's men, who have relied heavily on winning the ball in advanced areas and high-octane attacking, have repeatedly struggled to break down teams who surrender possession and rely on counter-attacks and – particularly – set-pieces. It's a problem the German has yet to solve - signified by the drab 0-0 draw with Southampton on Sunday - and perhaps Liverpool may have produced a more competitive title bid had they addressed the issue that Burnley highlighted early on.

After a sub-standard first-half display against Arsenal in September, Antonio Conte flipped Chelsea's season on its head. At 3-0 down, the Blues switched to a 3-4-3 formation in the 55th minute in an attempt to contain Arsenal's wave of attacks and prevent further humiliation. The approach worked well, and Conte stuck with it for the trip to Hull the following weekend.

Mike Phelan's charges were enjoying a relatively strong start to the season, which included a surprise opening-day victory over champions Leicester, and had proved a tough test for one of the division's big boys already - Manchester United required a last-minute Marcus Rashford goal to beat them.

But on this occasion Chelsea's tactical switch proved too much, as goals from Willian and Diego Costa boosted Conte and his team's confidence in their new formation - one which complemented the qualities of Chelsea's most influential players in David Luiz, N'Golo Kante, Eden Hazard and Costa. The Hull game began a 13-match winning run, which set the tone for a season of dominance.

Before Tottenham stopped Manchester City in their tracks at White Hart Lane, Pep Guardiola's first season in English football looked set to be a successful one. City had won each of their six league matches before their trip to north London in early October, including a fine Manchester derby win away at Old Trafford.

An own goal from Aleksandar Kolarov and a trademark Dele Alli finish weren't enough to knock City off the top of the table, but it did instigate a string of bad results and performances which led to them being eliminated from title contention by the turn of the year. Draws at home to Everton, Southampton and Middlesbrough in their next four fixtures set the tone for a dismal season of results at the Etihad Stadium.

For Spurs, this triumph kick-started their own title challenge after a stuttering start to the season that featured too many draws – six in the first 11 matches.

This topsy-turvy affair at the Liberty Stadium ultimately contributed to the firing of both Bob Bradley and Alan Pardew.

Swansea led 3-1, Palace fought back to lead 4-3, and then the Swans did the unthinkable and snatched it in stoppage time courtesy of a Fernando Llorente tap-in. Although it was one of the most unpredictable and dramatic games of the season, this clash lacked serious top-flight quality: both sides conceded horrendously sloppy goals - featuring deflections, dire defending and a number of goalmouth scrambles - and showed why they were in for a season of struggle.

Bradley was sacked and replaced by Paul Clement a month later, with Pardew having got the boot just a few days earlier (merry Christmas to you both). Both teams now look in good shape to avoid the drop: Sam Allardyce has guided Palace to within a point of safety, while Clement and Swansea also have a good chance of finishing outside the bottom three after securing victory at Everton.

Watford were many punters' tip for relegation at the start of the campaign, but the Hornets look to have evaded the dreaded second-season syndrome which has felled many before them. This terrific showing at the Emirates was arguably the key moment in their battle for survival.

For Arsenal, this was the moment when they began to throw away their strong first half of the season. Arsene Wenger's men found themselves 2-0 down in the first 15 minutes, courtesy of goals from Younes Kaboul and Troy Deeney; Alex Iwobi scored a second-half consolation before the hour mark, but that was all the hosts could muster as they fell below north London rivals Tottenham in the table. Spurs have remained above Arsenal ever since and already secured a higher finish than their neighbours for the first time since 1994/95.

This defeat by Watford signalled the start of a storm at the Emirates; infighting among supporters, a rise in 'Wenger out' banners (both at the Emirates and much, much further afield) and public tantrums from Alexis Sanchez. It's left them with an uphill struggle to secure Champions League football – something they last failed to do in 1996/97.

In less than a year, Claudio Ranieri experienced the highest of highs and the lowest of lows in professional football. Title-winning manager against all odds in May; out of a job in February.

This loss to Swansea summed up the Italian's second season in charge. The defending champions produced a lacklustre, laboured and turgid away performance, registering just a single shot on target against relegation rivals.

Ranieri was afforded two more games at the helm - an FA cup defeat by Millwall and a 2-1 reverse against to Sevilla in the Champions League - but the nature of the Swansea setback sparked the beginning of the end for Ranieri's Leicester journey.

Jose Mourinho's pursuit of Champions League football may still be successful via the Europa League, but games like this one at home to Bournemouth typify why his side look set to miss out on the top four.

This encounter will be best remembered for a Tyrone Mings stamp on Zlatan Ibrahimovic, which resulted in a five-game ban, and the elbow that Ibrahimovic aimed at Mings in return. Yet the biggest take-away was United's inability to break down a 10-man unit that defended stoically throughout. Ibrahimovic had a penalty saved by Artur Boruc, but United were unable to convert their 20 shots into a winning goal.

The Red Devils' league season has been characterised by similar results: they also fell short in converting chances at home to Stoke, Burnley, West Ham and Hull. As a consequence, their Champions League aspirations are reliant on a successful conclusion to their Europa League campaign.

While Tottenham's defeat by West Ham last Friday burst their title bubble, Hammers fans will view this match as the one that cemented their Premier League status for another season – and quite possibly saved Slaven Bilic his job. The Croat's side have struggled to adjust in their new surroundings at the London Stadium, but last week's derby success made it feel like home for the first time.

For Spurs, this was near confirmation that they'll be ending the season potless once more, despite another valiant effort. Mauricio Pochettino's men had won their previous nine top-flight matches, but were left to rue an indifferent spell between the middle of October and end of November when they emerged victorious from only one league fixture.