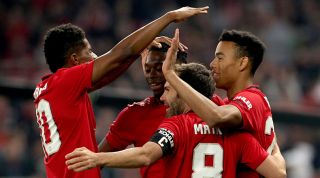 “Thanks for making us smile again,” he told the new United boss, who acknowledged the compliment gratefully. Van Gaal had been at the club a month or two, but a 100% record in pre-season brought an immediate bounce after a terrible term under David Moyes.

Those six pre-season victories in 2014 raised hopes that the Moyes season was a one-off. Optimism soared after the signings of Angel Di Maria and Radamel Falcao. United went on to finish 17 points behind champions Chelsea in fourth.

So nobody will be getting carried away after the excellent pre-season form so far under Ole Gunnar Solskjaer. European champions Liverpool may be stumbling through their preparations, but United have won every game. They still have two to play, in Oslo against Kristiansund on Tuesday and in Cardiff this Saturday against Milan, having beaten Inter, Spurs, Leeds United and Perth Glory.

Kristiansund is Solskjaer’s home town 350 miles to the north, and while he’s never played for them, he has always supported the club and his son could play in the game.

They’re in the middle of their season, so it’s a decent test to see if United can continue the fast, pressing, energetic and attacking football which Solskjaer and his coaches want. He also demands that his players play as he believes Manchester United players should do. Ole and his coaches are pushing them to be tougher mentally, to be more communicative, more assertive, more aware of who they are and the responsibility which comes with it. They don’t want players making knobs of themselves on social media. They want confident, assured leaders.

Solskjaer still has a huge job on his hands, but his two new signings have performed well. Aaron Wan-Bissaka may be shy and almost unable to do a coherent media interview, but he’s considered ready for the first team. Daniel James is rawer and needs to be more clinical in front of goal and with his final ball, but he’s faster than his Wales boss Ryan Giggs ever was and has enough energy to power north-west England.

In 2014, Van Gaal’s team started the season at home to Swansea City – and lost. All hell broke loose. United panicked and signed Di Maria and Falcao. Fans addicted to the buzz of transfers were delighted, but neither worked. Poor recruitment meant the homework hadn’t been done on either. Falcao wasn’t fully recovered from a serious injury, and Di Maria had never lived anywhere where it rains occasionally.

Some fans may clamour for marquee names. Not unsurprisingly, they’re furious at how supposedly top United players looked shot and unfit for purpose in the closing league games. There’s an argument that a leopard can’t change its spots, yet those players had so convinced when Solskjaer arrived. They all know that their reputations are on the line, but the Norwegian – who hinted at a summer clear-out before discovering that few can afford his overpaid charges – also wants additions.

Harry Maguire should come, but it’s not done. United’s supposed interest in Bruno Fernandes is actually being driven by the player’s agent and the Portuguese media, but United do need a brilliant central midfielder. Who is that person to be? Is Nemanja Matic the player he was? Is Scott McTominay going to kick on enough? Will Fred come good after a woeful first season?

There will be departures. Romelu Lukaku is likely to go soonest if Inter Milan pay what United have asked all along. He’s not been flavour of the month among fans either, but he’s scored a lot of goals for United. They need to be replaced – and then some.

Can Mason Greenwood step up and score them, and can Marcus Rashford score more? Or Anthony Martial, who, like Rashford, has looked decent pre-season. Can he play in a more effective central role? And don't forget Alexis Sanchez, understandably written off by many, yet still – and ridiculously so – the club’s best-paid player.

QUIZ! How many of the 33 Belgian goalscorers in Premier League history can you name?

And what about the defence? A settled centre-back partnership has been lacking and is needed, but where will it come from? Victor Lindelof and Maguire? These are questions for which there are no answers on the cusp of the new season.

Solskjaer also needs to feel like he’s been genuinely supported by those above him – and it’s in the club’s interests to do that. Sacking him would be a massive criticism of Ed Woodward, since he’s the man who has overseen failed managerial appointments and poor recruitment in the post-Ferguson years. The buck stops with Ed.

I’ve been at the pre-season games in Asia, and I’m now in Oslo. What I’ve seen means I’m more confident about United than I was a month ago, though that’s not saying much in truth. But I’m genuinely looking forward to this season – and that’s not something I’d have said in May.

LISTS 11 football shirts that were actually improved by a sponsor