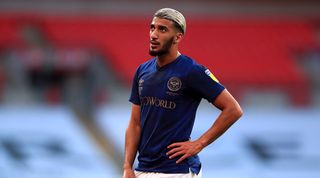 We don’t wish to rub it in for Brentford fans, after a heartbreaking play-off final defeat to west London rivals Fulham on Tuesday night… but a lot of that side are good enough to play Premier League football.

They could be next season, too - despite the Bees falling at the final hurdle. For years, Brentford’s famed ‘moneyball’ model has seen the likes of Neal Maupay, Andre Gray and Jack O’Connell shipped out of the club as soon as an offer comes in that the club can’t refuse. With arguably their strongest squad yet, fans are bracing themselves for another tumultuous summer.

It’s not all bad though. Brentford have a handy knack of replacing players successfully and given their late-season form this time around, they’ll be odds on to be in and around the top few again next season. Now, if they could just avoid those pesky play-offs…

The big one. Said Benrahma has been linked with Premier League sides in the past, but his performances have stepped up a notch this season. The Algerian has been involved in everything good about Brentford’s season, drifting in from his left-hand berth to link up with the midfielders and create between the lines.

Given how precious that creative ability is - and how little of it there is for a number of clubs in the Premier League - Benrahma could be a valuable commodity in this window. Arsenal desperately need creation, with Benrahma offering better value for money than a Philippe Coutinho loan deal or a big-wage Willian contract. Leicester City, too, could well look him, especially if Harvey Barnes wishes to leave.

Crystal Palace are also rumoured to be in for the No.10 should Wilf Zaha go. It seems the Bees will have to fight to hold onto him.

After signing for just £1.8m from Exeter City, Ollie Watkins has established himself as one of the most exciting strikers in the Championship, with his ability to drive at defenders. Goalscorers are priceless in the second tier, but with a number of Premier League sides struggling to hit the net last season, Brentford may struggle to turn down a bid ten times larger than what they paid for the 24-year-old.

Aston Villa are in dire need of goals, following a campaign in which they only just scraped 17th by a point and a Hawkeye malfunction. Palace, again, are in the frame, and as a proven goalscorer in the Championship with good resale value, Watkins has Sheffield United written all over him. Leeds United, too, might be looking for more firepower.

Could one of the bigger clubs take a gamble on Watkins though? 33-year-old Jamie Vardy is leant on heavily at Leicester. At £25m, Watkins looks like he won’t come cheap.

Rico Henry has been outstanding for Brentford at left-back this season. Having been earmarked for greatness at an early age at Walsall, the 23-year-old has really stepped up at Griffin Park, improving all aspects of his game and becoming a name to rely on.

The two sides that beat the Bees to automatic promotion, Leeds and West Bromwich Albion, are both apparently in for the athletic Henry. Both could do with bolstering their left flank for the Premier League, though other names could be in the frame; Sheffield United are apparently interested in the player, while Everton might need to replace Lucas Digne if he leaves for Chelsea. Newcastle United, too, are in need of a reliable left-back, since Steve Bruce seemingly doesn’t favour Matt Ritchie.

Could a bigger club pick up Henry? It seems unlikely, but Henry represents a cheap back-up. Arsenal are keen to offload Sead Kolasinac - who’s particularly poor defensively and commanding upwards of £100K a week. Liverpool, too, are in the market for a back-up to Andrew Robertson and Tottenham Hotspur are apparently losing patience with Ryan Sessegnon, while Danny Rose looks likely to go soon. Henry has plenty of room for growth, though perhaps isn’t quite ready for such a big step up yet.

21-year-old Josh Dasilva joined Brentford in 2018 from Arsenal, having come through the same Hale End academy that has produced the likes of Bukayo Saka, Reiss Nelson and Ainsley Maitland-Niles. The youngster was used at left-wing for the Gunners before moving into a forward role; for Brentford though, he’s been used primarily as a midfielder, where he’s thrived.

Now, there is talk linking him back with his former club. At 6’2, he’s a much more physical, commanding presence in the centre of midfield than some of the players that Arsenal have there already; the North Londoners are still working on extending Dani Ceballos’s stay at the Emirates, while it looks likely that they will lose Matteo Guendouzi and potentially Lucas Torreira and Maitland-Niles too, while Joe Willock looks far more effective making a darting run from wide. Dasilva is a cost-effective squad player who would slot in nicely at Arsenal and one that Mikel Arteta would no doubt relish tutoring.

There are other clubs who could do with some midfield depth this summer too. Brighton & Hove Albion, for one, will want to strengthen there, while West Ham United may look to Brentford to reshape their tired squad. It doesn’t seem likely that Dasilva will go, but if an offer came in to turn his head, who knows?