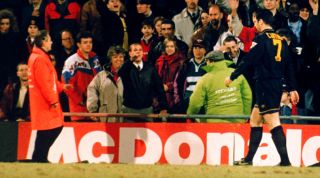 25th ANNIVERSARY: MORE ON THE KICK

"Should Eric Cantona be banned for life?"

A day after one of the most infamous incidents in British football, it was the first question from a member of the audience on TV’s Question Time. January 1995: a media storm already raging.

Jonathan Pearce, a radio commentator at the mid-week match between Crystal Palace and Manchester United, had relayed the incident live.

After Cantona's fifth red card in United colours - this time for a frustrated kick-out at Palace's Richard Shaw – listeners heard his verdict: "Where can there be a place in the game for a man of such extravagant talent? A man with such wicked temperament. A man who has quite rightly been dismissed. A man who has now just - OH MY GOODNESS ME - HE'S KICKED, HE'S PUNCHED A FAN. ERIC CANTONA HAS JUMPED IN AND SCISSOR, KUNG FU KICKED A FAN ... I HAVE NEVER SEEN SUCH A DISGRACEFUL INCIDENT AS THAT IN ALL MY YEARS IN FOOTBALL. ERIC CANTONA SHOULD BE THROWN OUT OF THE GAME."

You've probably heard it many times before, but on the 24th anniversary of the #Cantona kung fu kick, take a moment to listen again to the glorious Jonathan Pearce commentary of the incident on Capital Gold. pic.twitter.com/SgdJIw0Rsa

Immediately following his dismissal, Cantona - as if in mourning – had folded down his famous collar and trudged from the pitch towards the main stand. United’s kit-man Norman Davies stepped forward to shepherd him. What happened next stunned everyone. A Palace fan raced down 11 rows to hurl abuse at Cantona, who straight away gave Davies the slip and aimed a kung fu kick at the man in question.

This failure to hang onto Cantona would earn Davies the moniker 'Vaseline' amongst the United players.

Having finally ushered Cantona back to the dressing room, Davies and United's Head of Security, Ned Kelly, now had to keep him there. The previous season, having been clubbed by a Turkish policeman following his sending off in Galatasaray, Cantona had vowed to seek retribution. That night, the United players had to tag in and out of the shower to make sure Cantona had no chance to make good his threat. At Selhurst Park, the away dressing room was locked from the inside. Cantona's rage was soothed with that most English of remedies, a nice cup of tea. In his absence United would concede a late Gareth Southgate goal, to draw the game 1-1. It was a disappointing result in an ultimately doomed title defence.

Lee Sharpe recalls that after any bad away result, the players would extend their on-pitch warm-down to give Alex Ferguson time to cool off. But on this occasion, they couldn't get back to the dressing room fast enough – not wanting to miss the ‘hair-dryer’ Cantona would surely suffer. Sharpe has the boss storming in with such force as to rock the door from its hinges, turning over a table, then mercilessly hammering the players one by one for their performance. All except one that is. To the incredulity of his teammates, all Cantona received was a mild, "Eric you can't go around doing things like that, son." Sharpe may have embellished the story a little, but this does indicate the special treatment reserved for United's magnificent no.7.

Crystal Palace's then-manager, Alan Smith, recounts meeting Ferguson following the post-match press conference. "We shook hands and he said, 'What the bloody hell was wrong with that then?' He was even trying to put a case that Cantona had been badly treated. Look, to be frank, I was Alan Smith, he was Alex Ferguson. So I said, 'Totally agree, nothing wrong with it. An everyday occurrence.'"

Ferguson, whose eyes had been fixed on the field as Cantona went airborne, did not see footage of the incident until early the next morning. He discovered that the media did not deem it an everyday occurrence in the slightest. The tabloids went to town, shouting loudest for a life ban. In one edition the Sun dedicated 13 pages to the 'Shame of Cantona.' They also secured an exclusive interview with Cantona's 'victim' who had laughably claimed his words of provocation were no more severe than "Off, off, off. Go on Cantona, have an early shower." The Sunday Mail even sent reporters to Marseille to dig up dirt from Cantona's past.

As Philippe Auclair reveals in his wonderful biography of Cantona, the man himself would spend the morning after the night before at the training ground, popping by the club shop. His purchase? A Cantona 7 shirt for his infant son. It was a typical act of confidence in the face of media hostility.

As United formulated a plan to satisfy the outraged FA while staying loyal to their star forward, a BBC reporter asked school children their opinion. Pundits opined about "role-models". Some pointed out that Cantona was foreign – as if to say, what do you expect? As John Champion, covering the game for 5 Live, said as Cantona left the pitch, "He's stomping away shaking his gallic head. Swarthy-looking character."

Busby Babe, Bill Foulkes took this and ran with it. "Eric is French – they’re different to us; he reacts differently." Foulkes had perhaps forgotten the occasion at Luton in 1960 where his teammate, goalkeeper Harry Gregg, had hit an abusive fan hard enough to knock him out.

On Thursday, late-night viewers of BBC2 in the north of England found regular programming replaced by a special Close Up North. A panel including a journalist, sports' law expert, former player and fans' representatives convened. The raging debate paused only to go live to Old Trafford where fans had gathered awaiting news of Cantona's fate. One supporter - wearing a red and black ski hat on this most bitter of evenings - memorably rebutted concerns that Cantona was a poor role model for the nation's youth. "On Monday my daughter was born, Laura Jane Cantona Boyle. Even now I've got no regrets about calling her that. Obviously, he's overreacted but he's only human ... Or is he?!"

Whether Mr Boyle departed his vigil in time to help with his newborn's 2am feed is unknown.

While the police in the UK continued their investigations, Cantona found their counterparts in Guadeloupe far more understanding. Cantona and his young family had travelled to the Caribbean island to escape the media frenzy only to find an ITN crew on their tail. Cantona would take exception to the journalist who filmed his heavily pregnant wife in her bikini on the beach. It was alleged Cantona snatched the newsman in a headlock followed by a repeat performance of his Kung Fu kick. The Guadeloupe police decided to confiscate ITN’s footage and gave it to Cantona.

As details of the xenophobic history of Cantona’s abuser at Selhurst Park seeped out, public opinion swung in the footballer's favour. News that Cantona would serve a two-week prison term on top of a nine-month ban from football only added to a sense that the punishment was too harsh.

Following a swift appeal, Cantona's sentence was reduced to 120 hours of community service, which took the form of football coaching, much to the delight of local children (and their parents).

Ned Kelly and United's lawyer Maurice Watkins have both claimed credit for helping Cantona formulate his classic seagulls and sardines line, delivered to the assembled press immediately following the appeal. With those enigmatic words, Eric Cantona’s transformation from a foreign villain to international treasure seemed complete.

COMMENT The paradox of success: why do we think quick success is only delivered by short-term managers?