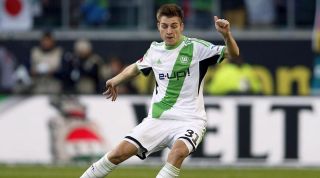 Wolfsburg's quest for a Champions League return has been bolstered this season by the emergence of a 21-year-old local boy by the name of Robin Knoche. A native of the Lower Saxony region, Knoche spent his youth career at Germania Lamme and Olympia Braunschweig before joining the Wolves in 2005.

Despite making his Bundesliga bow in 2011, the towering centre-back has been used sparingly over the past few seasons, primarily plying his trade in midfield during the last campaign, with the likes of Simon Kjaer, Naldo, Alexander Madlung and former Middlesbrough man Emanuel Pogatetz limiting opportunities in his preferred central-defensive role. But with three of the four having departed the club – Naldo being the exception – Knoche has seized his chance, featuring in all but two Bundesliga matches this season.

Playing alongside experienced Brazilian Naldo, the pair have formed a solid partnership at the heart of Wolfsburg's defence, helping Dieter Hecking's side achieve their best points haul going into the winter break since their title-winning campaign of 2008/09. And, despite a recent blip against Borussia Dortmund (both in the league and DFB-Pokal semi-finals), the Wolves are only one point adrift of a Champions League play-off place. A string of impressive outings have also led to four under-21 caps, as Knoche continues his rise to inevitable stardom.

Along with the likes of Hamburg's Jonathan Tah, Wolfsburg's No.31 is one of Germany's brightest young defenders and is hotly tipped for an international call-up in the near future. Possessing all the attributes to succeed at the very top, Knoche has already been compared with Dortmund's Mats Hummels and is fast becoming one of the most reliable defenders in the league. At 6ft 3in it's hard not to notice the boy from Braunschweig. With his aerial prowess and composure on the ball, Knoche has all the makings of a future star – perhaps in the Premier League.

A commanding presence at the back, Knoche is confident and calm in possession. His distribution is consistent, largely down to his ability to use either foot with comfort. The young defender also poses an aerial threat from set-pieces, having struck twice for the Wolves and once in four appearances for Germany's under-21s this season. For a 21-year-old, Knoche boasts maturity beyond his years with an ability to read the game and position himself immaculately.

After uncharacteristically shipping six goals against both Hoffenheim and Bayern in March, the pairing of Knoche and Naldo were brought back down to earth - a sign that their understanding still has a long way to go, especially with Champions League football the aim. Knoche himself has also expressed a desire to improve the ability of his left foot and add more goals to his repertoire. The lofty centre-back is not content with his two-goal return so far, highlighting an ambition to use his height advantage to get his name on the scoresheet more often.

Earlier this season, despite Knoche only having played a handful of games, Klaus Allofs, former Germany international and current sporting director at Wolfsburg, said: "His development was not to be expected six months ago. He has taken his chances and now gets more and more security. If things keep going well for Wolfsburg, Knoche will automatically be a topic for Joachim Low and will soon be a candidate for the national team."

In his brief career, Knoche has already lifted silverware, winning the 2011 under-19 league title with the Wolves in a team which also featured another highly-rated youth academy graduate who has broken into the senior side in Maximilian Arnold.

After signing a contract seeing him through until the summer of 2017, it's likely that we'll be seeing Knoche donning the Wolfsburg shirt for a few more years while he continues to develop, so don't expect a move to the Premier League or one of Europe's top sides just yet. With a realistic possibility of playing European football next season, Knoche could get the chance to showcase his outstanding talent on a bigger stage, with a call-up to the German national side surely not too far off in the distant future. Remember the name.