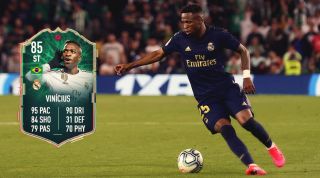 If you don't have pace in your team in FIFA 20, you're going to struggle. Without it, you’re unlikely to get behind defences and score. And that wouldn’t be much fun now, would it?

In the spirit of being quick, here are 10 of the fastest players on FIFA Ultimate Team – all of whom cost less than 20k coins…

Costa is essentially an affordable version of Neymar on Ultimate Team. He plays similarly to his countryman, with the only noticeable difference between the pair being Neymar’s custom animations and his five-star weak foot.

The Brazilian’s pace is rated 94, meaning he can fly past any defender on the game. Whenever you see in Costa in FUT, you know you're about to have a tough game.

The Monaco winger is the second-fastest player in Ligue 1, behind the one and only Kylian Mbappe, and that makes him a must-have/

His five-star skill ratings means that you can ditch conventional skill moves such as the 360 and good old fake shot, and opt for flashier ones such as the sombrero flick.

Standing at 6ft 1in and boasting blistering pace (94), Williams is an absolute powerhouse up front.

Once the Bilbao man gets going, there’s no slowing him – not just because of his pace, but his impressive strength (85) allows him to shield the ball and shrug defenders off.

THE LOOKFIFA 20 best kits: 10 great shirts you need in your life

OFFLINEFIFA 20 Career Mode: the 8 best teams we can’t wait to use

While he doesn’t have his famed headband in the game, Toon Army cult icon Saint-Maximin possesses something much more important – pace, and lots of it.

The Frenchman is one of the fastest Premier League players on FIFA 20: his pace (93) and agility (93) allow him to weave skillfully though defences.

Saint-Maximin’s FUT item has a five-star skill rating and a four-star weak foot, both of which allow him to dribble his way into your opponent’s box and then find the net.

Real Madrid golden boy Vinicius is one of the most explosive players in the entire game for the second year running. His overall rating of 79 is decent, but he plays well above his stats, primarily because of how important pace is on FIFA 20.

The Brazilian winger pace (93) is enough to make him borderline unstoppable when he goes on a run, while his agility (93) means he can also slalom past defenders.

‘Chucky’, as many like to call him, has been one of the most overpowered players since FIFA 18. Because he used to play for PSV, he was mainly used as a super sub, but now that he plies his trade in Serie A with Napoli, the Mexican can quite easily fit into a squad with full chemistry.

Lozano's pace (93), agility (91) and stamina (82) make him a handful across the full 90 minutes. He’s one of the best wingers in Italy, and certainly one of the fastest in the league.

Werner is comfortably one of the best strikers on FIFA 20, and not just because he's rapid.

With sublime pace (92), finishing (82) and attacking positioning (85) stats, stick his FUT card up front and watch your opponents rage quit as the German scores for fun.

GUIDEFIFA 20 Chemistry Styles: how to make the most of them in Ultimate Team

Coman’s FUT card is one of the most used cards at this stage of FIFA 20, and it’s easy to see why with pace (92), dribbling (86) and a five-star skill rating. He's the dictionary defintion of 'tricky winger'.

We won't piegonhole him though, as the Frenchman can be deployed as a striker or a winger and possesses the overall skill set needed to be deployed anywhere in the attacking third. When he's about, expect goals.

Shakhtar Donetsk’s attacking midfielder is incredibly underrated on FUT, which is probably due to the fact he plays in the Ukrainian league. He’s got loads of pace (92) but brings a lot more to the table than just being able to outrun players.

Standing at 5ft 8in and boasting 90 agility, you’ll be able to waltz gracefully across the pitch with the Brazilian, successfully evading most players in your path thanks to his low centre of gravity and high agility rating. He's either a great super sub or starter if you're building a Brazilian team.

The Premier League’s resident skill merchant would be an excellent addition to your Ultimate Team lineup, as he's capable of single-handedly winning you matches.

Zaha's pace (91) combines nicely with his impressive dribbling (90) stats to make him a prolific forward on FIFA 20 and his massive drop in price since launch means he'll hardly make a dent in your coin balance.