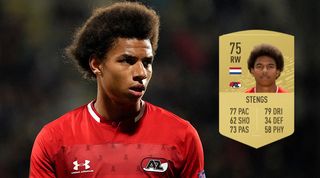 If you've been looking to freshen up your squad in FIFA 20’s career mode with some of the best young players in the game, then we're here to help you find the wonderkids who could transform your team.

Whether you're looking for a commanding shot-stopper to help your squad secure some clean sheets or a graceful playmaker to consistently supply your strikers, here are the best young players you'll want to sign by their potential in-game...

FIFA 20 best kits: 10 great shirts you need in your life

Bruun Larsen has gone a little under the radar as far as Bundesliga wonderkids go, having struggled to truly make his mark for Dortmund in real life with only one assist to his name this season. But regardless of that, the Dane is undoubtedly one of the brightest young talents on FIFA 20’s career mode.

Standing at 6ft, boasting a four-star weak foot, and with a pace rating in the mid 80s, he's a versatile winger who will be borderline unstoppable once he reaches his full potential in-game.

The 20-year-old Dominguez is a wonderkind you'll want to grab as soon as you start your FIFA 20 career mode.

He has a base rating of 75, which means he would get into most mid-table sides, and his physicality is a key asset. The Argentine has great aggression (85), jumping (85), and stamina (91) stats, making him an excellent box-to-box midfielder, especially when combined with his high/high work-rates.

Radu is currently on loan at Genoa from Inter Milan, who are looking to aid his development with a temporary spell away from San Siro.

While he’s initial 75 rating is some distance away from his full potential in-game, his base stats for diving (79) and reflexes (80) mean he is a good first-team option if you're managing a mid-table team, and he can clearly become a world-class shot-stopper with the right amount of game time.

Retsos is a versatile defender who can play anywhere across the back four. That’s an essential trait too, seeing as he’d be able to fulfil various roles in the event of an injury to key defensive players mid-game.

Not only is he a handy squad option, the Leverkusen wonderkid can potentially reach the level of Jerome Boateng should you place a strong emphasis on his development.

OFFLINEFIFA 20 Career Mode: the 8 best teams we can’t wait to use

Stengs has a four-star skill rating which allows him to perform moves such as the lateral heel-to-heel flick as well as the Berba Spin, making him is an unpredictable force in the attacking third.

Unsurprisingly, his initial stats are highest when comes to dribbling, as he has high agility (80) and ball control (82). Upon reaching his full potential, AZ’s 20-year-old is a superb winger who’s capable of troubling any defensive lineup.

Plying his trade in Serie A with Brescia, the 18-year-old Tonali might just be one of FIFA 20’s best midfield wonderkids.

From the looks of things, the Italian will be a Gullit-gang type of player once he reaches his full potential – his stats start off quite promising to say the least. Tonali has decent long (80) and short passing (77) stats, allowing him to ping the ball back and forth with accuracy across the midfielder. He'd be a very handy addition with Dominguez, if you're after a youthful midfield.

Zaniolo’s stock has already risen a fair bit in real life. His performances for Roma last season prompted interest from the likes of Tottenham and Juventus, with Spurs most serious about signing him.

The Italian’s transfer fee might prove to be a little expensive, especially if you're not playing for one of the bigger teams, due to his real life form. However, splashing the cash is worth it in this case, especially considering his amazing potential and good all-round base stats for a CAM.

The Argentine youngster is the sort of physical player you'll want in your defence; he weighs 79kg and comes with good strength (75) and jumping (76) stats, meaning he can easily shrug opposition players off the ball and will win a lot of headers.

His stats at the start mean he'll be a rotation player at best for most clubs, but snap him early, as Romero has the potential to become one of the best centre-backs in the world.

The Messi-esque Almada is one of the best Argentine wonderkids on FIFA 20, and there's no higher praise we can give to a young player.

With 86 pace, 88 agility, and 89 balance, he makes for a great impact sub early on, and the 18-year-old’s potential is very exciting considering that his stats are already at a decent level.

Urzi is a versatile midfielder who can be deployed as a winger or a CAM. He’d do OK as a more conventional CM, but doesn't have the strength to perform a box-to-box role.

Standing at 5ft 6in, Urzi has an incredibly low centre of gravity. That gives him better ball control in-game, letting him weave past and evade defenders. He’s also quite fast and has enough pace (88) to get past most players, which could possibly become 95+ once he reaches his full potential.

A true artist on the ball, Verschaeren is one of the best Belgian youngsters you can pick up on FIFA 20's career mode.

The 17-year-old’s standout stat is his agility (87), which makes him feel quick and responsive in-game, and his perfect for weaving through packed defences. While his middling pace (70) to begin with doesn't mark him out as an instant starter, he's sure to get faster as he develops.

Blessed with a four-star weak foot, a four-star skill rating, and a towering 6ft frame, Ihattaren was more or less built to be a No.10.

He doesn’t have any base stats that stand out immediately – he’s only 16, after all – but Ihattaren will become one of the most sought-after midfielders a couple of years into your career mode save. Make sure you snag this wonderkid as soon as you can.

Argentines... everywhere. While his base rating of 70 means he's very much a rough diamond, De la Vega possesses ample pace (86) and impressive agility (86), making him a perfect rotation option in your squad.

The 18-year-old wonderkid has plenty room for improvement, as his base stats can still go up by a whooping 18. Once he reaches his full potential, he might go a step further than simply being a world class wonderkid – De la Vega could become a generational talent for your team.

Soumare has the potential to become one of the best French midfielders on FIFA 20.

He’s the same height as Les Bleus legend Patrick Vieira (6ft 2in) and weighs 82kg, thus giving him a strong physical presence on the pitch. As a combative holding midfielder, Soumare would be the perfect shield in front of your back four.

With a five-star weak foot, David is capable of finding the net with both feet. He’s therefore incredibly clinical in front of goal, as you’d be able to perform first-time shots without having to make a turn or get the ball onto his ‘stronger’ foot.