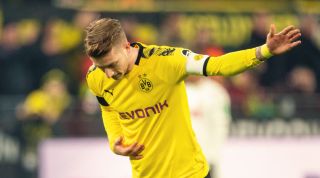 Six minutes on the clock, 18 teams to guess.

NOW TRY Quiz! Can you name every MLS team for the 2020 season?

There's something special about the Bundesliga.

It doesn't have the same kind of warmth of La Liga - that exotic, sun-kissed feel that makes it irresistable for footballers to go and play in. It doesn't have that sweet 90s nostalgia that Serie A does, either.

What Germany does better than anyone though, is good, old-fashioned football. Tough nuts, tricky wingers, bonkers fanbases and super Marco Reus, tearing up defences on his lonesome.

This is another big weekend in the meandering slalom that is the Bundesliga title race - how many of this year's current crop can you rack your brains for in the six minutes provided?