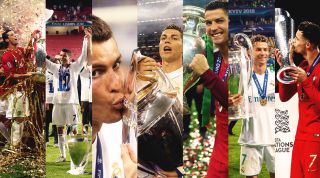 10 minutes on the clock, 77 names to guess - some do appear more than once

NOW TRY Quiz! Can you name the World Cup award winners since 1930?

Cristiano Ronaldo will be 36 years old when he begins the defence of Portugal's European Championship title next summer. It's almost inarguable, by now, that he's the greatest European in the game, ever.

CR7's lifted seven trophies to prove it, too. There are the two with Portugal, but don't forget the five times he's been a European champion at club level too.

Of course, Cristiano has done it all on his lonesome. We'd like you to name all 70 teammates that he started those finals with.

Yes - you can have "Ronaldo" for free as your first answer.