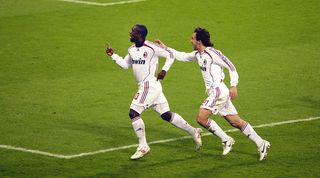 Ten minutes on the clock, 44 names to guess - don't forget the man himself!

NOW TRY Quiz! Can you name every country to compete at a FIFA World Cup?

What a footballer Clarence Seedorf was. Graceful on the ball, capable of beating a man and with a ferocious long shot on him.

The Dutchman was a member of four Champions League-winning sides. Unusually though, Super Claz won the trophy with three different sides.

The first came in 1995 with Louis van Gaal's Ajax side, against AC Milan - a team Seedorf would later play for. Three years later though, the Dutchman won the title with Real Madrid.