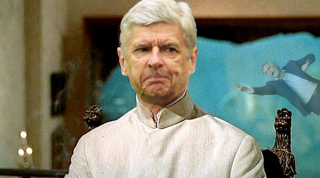 We’re sure that former Manchester United and France custodian Barthez doesn’t sit around his house in a leather swivel-chair, wearing a lapel-free suit, stroking a white Turkish Angora cat and extorting the Chinese government in an attempt to provoke all-out conflict between the superpowers – he seems like a nice man, really.

But his baldy mush is deeply reminiscent of Donald Pleasence’s superb turn as Bond’s arch-nemesis, and Fab only really needs a duelling scar to complete the look.

Also, Blofeld drove the car in the drive-by assassination of Bond’s only wife, Tracy, in On Her Majesty’s Secret Service, while Barthez is an accomplished wheel-handler himself, becoming a highly respected racing driver since retiring in 2007, and crowned French GT Champion in a Ferrari in 2013. Coincidence? We think not.

There’s always been a whiff of the henchman about Huth – who would have made an excellent bailiff in another life – and the 9ft tall East Berlin brute headbutts massive boulders, eats dumbbells and s***s lava as part of his daily workout at Leicester City’s plush Belvoir Drive training ground gym. A little precious-metal themed dentistry, and the Foxes stopper would make an excellent Jaws – biting through cable car cables, tussling on top of trains with a pyjama-wearing Bond (who is just trying to clean his teeth and cop off with Barbara Bach) – and generally doing the bidding of anarchic tycoon Karl Stromberg/Vichai Srivaddhanaprabha.

Abramovich has admitted paying millions of dollars for political favours to lay his hands on the Soviet Union’s mineral wealth; he emerged unscathed from his country’s ‘aluminium wars’ – in which numerous people were assassinated in gangland feuds – and is allegedly known in the Russian criminal underworld by the nickname ‘Badar’. The $9.1bn man and close pal of Vladmir Putin, who has a 162m yacht called Eclipse, is IN NO WAY like a Bond villain, mind. He was WRONGLY accused of bribery, illegal share dilution, theft, loan fraud and antitrust violation. He is also DEFINITELY NOT the head of a vast international criminal enterprise, aiming to destroy all life on earth and repopulate it with supreme Soviet steroid fiends. From his secret base. In space. With a rubbish beard. That’s Drax.

“Forgive my not shaking hands. It becomes a bit awkward,” purrs the original 007 rotter as he meets Bond and the fragrant Honey Rider in his sinister underground lair. Frankly, his excuse for not pressing the flesh – his mitts were lopped off by a Chinese crime syndicate, the Tongs – is a darn sight better than Arsene’s various petty snubbings of Jose Mourinho, Mark Hughes, Clive Allen et al. That said, a handshake is a “contract of friendship”, according to FIFA’s Fair Play Day scheme, so why bother? Dr No is hardly Mr Chummy: he’s a keen member of SPECTRE with a flame-throwing tractor, who plans to disrupt a space launch from Cape Canaveral with his massive laser beam, while Arsene is fed up of the whole shebang.

“How many hands do I have to shake? Is there a prescription?” he once moaned. Absolutely not, my dear fellow. Why not push Jose into an atomic reactor’s cooling vat and be done with it?

If we were a Canadian admiral in the film GoldenEye, and absolutely had to be murdered by one person who derives sexual pleasure from suffocating their victims with their thighs – having met them in a casino, got involved in a car chase and then being lured onto a yacht – an unlikely scenario, admittedly, but stay with us – we’d plump for Bobby Carlos. Those 60” oak trees would get the job done quickly and humanely (“they’re totally natural – I have to buy big trousers,” he once told FourFourTwo), and he’d deliver the classic line “I always enjoy a good squeeze,” with a cheeky grin on his face we’re sure.

Although he’s blotted his hardman copybook somewhat by gently moisturising his tattoos and throwing a towel at Adam Lallana in that Nivea advert, the Slovak killing machine still boasts the aura of being 13 stones of loosely controlled nutcase. We can just see Skrtel setting about 007’s nether regions with the knotted end of a roped carpet beater in some dreadful cellar, and if we ever did play Texas Hold ‘Em against him, we’d probably just end up crying and handing over all our chips after one nasty stare – even if we had a Royal Flush. Skrtel also weeps blood after defeats at Anfield.

The physical resemblance between the fiery Scotland manager and national treasure Dame Judi Dench (portrayer of M) has become impossible to ignore over recent years, but Wee Gordie would also make an excellent Rosa Klebb – the 5ft 4in, flame-haired SMERSH-affiliated Russian with a knuckleduster and knives in her shoes who once pointed a Beretta at Bond in a Paris hotel room. Just the kind of motivational weapons to shake up a moribund performance from Alan Hutton at half-time, right?

It’s hardly original stuff to compare the sadistic overlord of Cardiff City to a 007 nemesis – but which one does he most closely resemble? Curiously, very few Bond villains actually sport moustaches – Dr Kaufman, the Teutonic assassin in Tomorrow Never Dies probably boasts the lip-tickler most similar to Tan’s – while virtually none of them wore sunglasses. Very few even bothered with leather gloves. Stromberg’s claim on Tan is probably strongest, though: he aimed to convince the USSR and USA to declare war on each other, and then restart civilisation under the sea – an almost mirror image of Tan’s blueprint for the Bluebirds, which has already seen him flush lovely Ole Gunner Solskjaer through a trapdoor into a pool of sharks at his subterranean plotting den in Cardiff Bay.