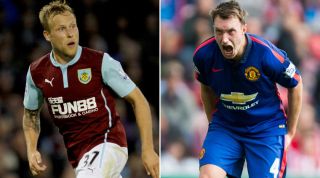 “The Capital One Cup’s for chumps, eh Louis?”

That might not be the exact conversation as the two managers shake hands ahead of their high noon meeting on Saturday – the Manchester United boss doesn’t seem the type to say “Damn right” – but it could be the gist. Early exits in the League Cup, United humiliatingly to MK Dons and Burnley quietly to Sheffield Wednesday, can be added to the middle of any Dyche-Van Gaal Venn diagram.

Also in that middle column, you’ll notice, is being winless after each manager’s first ever pair of Premier League games. Burnley’s performances are causing fans less anxiety than United’s, the promoted side having taken the lead and impressed in parts against Chelsea before losing narrowly at Swansea to a Nathan Dyer shot that Tom Heaton should have kept out

Good, battling performances are more important to Dyche at this moment in time than results, as his players get to grips with the division. There’d be no shame in making this three games without a point as long as they show the fight and ability that got them this far, preparing them for a run of five very winnable games against Crystal Palace, Sunderland, West Brom, Leicester and West Ham. Not that they’d turn down a point or three against England’s most successful ever club.

United’s demise has been all over the... well, everything, such is their global reach. After winning every match in pre-season – another example of summer form counting for little – the team has looked disastrously deficient in almost every area. Big, big questions remain over Van Gaal’s squad and whether the personnel fit his preferred 3-5-2 system. Worryingly, their net summer spend has hit £125 million, yet they surely need two or maybe three more players.

However, they do at least face all three promoted teams in a row now, and could conceivably round off their opening six fixtures with 13 points, which would at least be six more than David Moyes managed.

Normally this would be where we add that Burnley haven’t beaten United in 76 attempts, but actually the Clarets won 1-0 in their first home game of the 2009/10 season, their last foray into the Premier League. Almost exactly five years later, they’ll be hoping to do it again without the services of goalscorer Robbie Blake (or, indeed, anyone else who was in the squad that night).

“Lord, send me an Angel.” Van Gaal should have Di Maria available for debut, and where better for him to make it than Turf Moor? Fellow Argentine Marcus Rojo is still awaiting a work permit.

Injury-wise, Rafael may return but the visitors are without midfielders Ander Herrera, Michael Carrick, Shinji Kagawa, Jesse Lingard and Marouane Fellaini, which presents the tantalising prospect of Anderson starting. Luke Shaw’s continued absence means Ashley Young can continue to pretend he’s a wing-back, and Chris Smalling is a doubt – ‘as usual’, etc etc – with a hamstring injury.

Burnley have a far cleaner bill of health, if anyone still gets bills of health. Sam Vokes remains a long-term absentee, which is a far bigger setback for Wales, if we’re honest: Charlton’s Simon Church is the only recognised striker in their squad to face Andorra.

United's problems so far have come in defence, which has been all too ready to concede responsibility, possession and four goals to a League One team. But they’ve also looked short of goals at the other end, an issue stemming from a lack of creativity but also killer instinct. Against Sunderland, Van Gaal’s players seemed hesitant to pull the trigger; the best example being Robin van Persie in the attack that ended with Young’s dive.

Rooney has the confidence and ability to be the talisman Van Gaal needs on the pitch. United also need him to score goals to bail out a flimsy defence. The good news is that so far this season Rooney has been playing further forward as a genuine striker, instead of repeatedly coming deep to pick up the ball. If he can receive the ball in good areas and act on impulse he can be a major goal threat, and a key asset in a changing team.

Dyche has said it’s increasingly difficult for a Premier League club of Burnley’s size to get signings over the line. He says he’s made 500 calls in trying to bring in players, and that was three weeks ago – it’s probably in the thousands now. We hope he’s on a good tariff.

So far everyone’s tips for relegation have spent just £3m on seven players (and not received a penny the other way), and while the club is presumably prepared for going straight down, the onus is on ‘the ginger Mourinho’ to take a team lacking in stars to even dizzier heights. After all, he’s done it once.

Plenty has been said about Van Gaal already, so let’s instead point out that with Neil Warnock’s appointment at Crystal Palace, the Dutchman drops from fourth to fifth in the Premier League and Football League’s ‘oldest incumbent managers’ list. He’ll be furious.

The scruffy 1-0 win Van Gaal needs, if not the one he deserves right now. But he’ll take it.