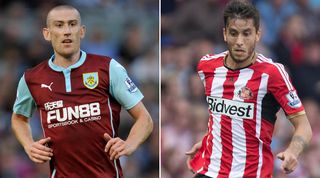 The battle of the draw specialists. Not a great draw for the neutral.

Four games in and with still no win to their name, this is possibly Burnley's first Must Win game of the season.

You could argue that came in last week's away game at Crystal Palace, in which they snatched a draw from the jaws of victory by missing a late penalty, but that was away from home so more Must Not Lose. This is at home, where poor patronised minnows such as Burnley are repeatedly told they must win their games, particularly against teams like Sunderland.

The visitors are only a point and three places better off, and they too are winless after four games. But having signed nine new players in the summer, including £10 million Jack Rodwell, they are clearly a team in transition. Three draws and defeat at QPR has not been the start many had hoped for and has led to chuntering. "These are the hard times especially for the fans," admitted Jozy Altidore. "They want to see the team be successful right now, which is difficult."

Gus Poyet is approaching the anniversary of taking over from fascist crackpot Paolo Di Canio and the Uruguayan's more aesthetic approach with almost an entirely new team is taking time to bear fruit. Sunderland were unable to play their tempo-dictating possession game against Spurs last weekend because the visitors were better at it and wouldn't give them the ball.

But the fact they stole a point in a 2-2 draw emphasises the battling qualities they possess (not to mention the hopeless profligacy of Tottenham).

Poyet was able to leave £12m striker and Burnley old boy Steven Fletcher out of his squad entirely for that game, a decision that shows the financial gulf between these two teams, and one which must make Sean Dyche weep himself to sleep at night.

His team are floundering at the bottom end because they can’t score goals. That is hardly news, nor is it a unique problem for a team that has just been promoted and isn't being bankrolled by a sheikh.

They are at least solid at the back, as two consecutive clean sheets shows, but their one and so far only league goal this season came 14 minutes into the first game. To compound the problem, last season's 26-goal headline grabber Danny Ings has been hamstrung by his hamstring and will miss this game, so the onus for goals will now fall on his replacement, Marvin Sordell. Which, given his recent, is a worry for them.

A draw wouldn't be the end of the world for either side at this stage of the season, but Burnley's need for a win is great and will only grow greater with every passing game.

While Sunderland have a clean bill of health and an abundance of riches to choose from, Burnley have more injuries and fewer options. They will be without chief goalscorer Ings, whose tight hamstring is 'not too serious', but Matt Taylor's calf/shin woes should have cleared up for this game and could see him return. The more influential Sam Vokes still has no return date from his knee knack.

With respect to the influential Patrick van Aanholt and the impressive Emanuele Giaccherini (against Spurs at least), much of Sunderland's gameplan revolves around the marauding, sometimes moronic midfielder Cattermole. "If players like Adam Johnson and Ricky Álvarez don’t have the ball then they have to run and mark and that’s not easy for them," said Poyet after the Spurs game. "But it wasn’t because we were technically terrible or that we couldn’t pass the ball, it was that we couldn’t get the ball – which is a different issue." Getting the ball is Cattermole's forte – his 9 recoveries against Tottenham was more than any other player. Put simply, he makes the big machine tick.

Dyche watched the draw at Palace and spotted green shoots. "You can see the belief is growing," he said. "We just missed that extra quality in the top third."

To address that problem, he'll pray Sordell can answer his prayers – the man he sold to Bolton for £3.2m while at Watford, then brought to Turf Moor for £500,000. "He showed signs," said Dyche of Sordell's appearance at Palace. "It's just that little bit of belief in himself (that he needs) and it will come."

Meanwhile, opposite number Poyet was smiling after the Spurs game, relieved to have taken a point they didn't deserve and which he probably didn't expect. "I can tell you we are very realistic here and we know who we are playing against," he said, referring to the leagues within the league. He then boldly proclaimed: "We will get the three points in the next couple of weeks."

With five draws from eight games between them, only a moron would suggest anything other than a draw. 0-2.