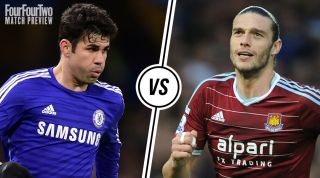 A chance for Big Sam to throw his massive spanner into Jose’s works.

Christmas is apparently a time for hope, and there's plenty of cause for optimism among all parties present at this festive capital city hate-fest.

Chelsea enthusiasts probably knew deep down that their side wasn’t quite good enough to go through an entire season unbeaten – and Jose Mourinho wisely shut down such crazy jibber-jabber whenever it was raised – but the tantalising prospect of some kind of magical double, treble or quadruple does now seem deeply plausible, however much the Portuguese gaffer doesn’t want to discuss it.

Frankly, Jose seems to possess a special juju in his sophomore season wherever he roams: he won the Champions League with Porto, the Premier League (again) with Chelsea, a Serie A-Coppa Italia-Champions League treble with Inter Milan, and La Liga at a canter with Real Madrid in his second terms.

With an outfit that currently seems devoid of real weaknesses, and which is able to win games in a myriad of different manners – either via pillow-over-a-pensioner’s-face-style asphyxiation or dazzling technical and creative dominance – 2015 currently resembles a tantalising top-end buffet ready for the scoffing.

For those Chelsea-haters, or neutrals who don’t want to see the Premier League season turn into a procession, however, there are also reasons for positive thinking. The Blues’ fixture list over the next month is an absolute beast.

There’s a fiery London derby on Boxing Day, Southampton and Spurs away, a Newcastle side who’ve beaten them recently, then a cup double-header with Liverpool before the Super Smackdown Saturday against Manchester City at the end of January.

City, meanwhile, face West Brom, Burnley, Sunderland and Everton, and have no League Cup distractions. Tiredness is now a key adversary. But if Mourinho rotates well and scampers through this schedule still in pole position, and it’d be a fool to bet against Chelsea glory.

West Ham can bask in a far less predictable, but no less enjoyably glorious 2014 so far. The Hammers haven’t been this far up the table at Christmas since 1985, a season in which they ultimately finished third – and the “Fat Sam Out” banners have been neatly folded away for a few months as a team brimming with collective effort and spearheaded by the brilliant Diafra Sakho have blasted their way into fourth.

It’s also a whopper of a month for Allardyce, however: his side will be enfeebled more than most by the Africa Cup of Nations, and a fixture list almost as eye-watering as Jose’s lies ahead. Get to the end of January relatively intact, and that Champions League talk will seem less idle.

A surprise on Friday, however, is unlikely. West Ham have beaten Chelsea just once in the last 17 meetings over the last decade, and you have to go back before the Roman empire to 2002 to find a Hammers win at Stamford Bridge. And while Allardyce has done brilliantly against mid-level sides this term, only defeats of Man City and Liverpool stand out against the supposed bigger boys. A festive suffocation from the hosts seems the most likely result.

As Alan Pardew and Arsene Wenger blub into their hampers about their festive injury lists, Jose and Sam can kick back to watch Miranda, Call The Midwife and Paul O’Grady – For The Love of Dogs through a stupor of Harvey's Bristol Cream and Thornton's Continental, content that most of their lads are fighting fit. With Mark Noble returning, West Ham have only James Tomkins crocked, while Jose’s only absence is Eden Hazard. Pass the cheeseboard...

The Cameroonian midfielder on loan from Barcelona has made a huge impact in the Hammers midfield. He outclassed Yaya Toure in the defeat of Man City, and will need to turn in a similar performance against Chelsea’s centre-circle titan Matic if the visitors are to get a grip of this fixture.

Song’s player dashboard against Leicester showcases a tireless individual who has an influence all over the park, completing 39 of 52 passes (with only his efforts in the attacking third really being wayward), winning 3 tackles and 2 aerial duels.

Matic, along with midfield sidekick John Obi Mikel, brilliantly snuffed out the threat of Bojan Krkic against Stoke, producing a powerful, domineering display. Against the Potters he completed 43 passes from 49 attempted, made 11 ball recoveries, won 9 tackles out of 12 and made 2 blocks. Song looks like one of very few midfielders capable of giving the big Serb a proper bit of pugilism, and this clash could prove crucial.

Little Jose is currently full of praise for Big Sam – “Big Sam is doing amazingly well this season” – and even texted him a ‘thank you’ note after his pal’s side beat Man City. Big Sam himself is also full of praise for Big Sam, trumpeting that: “it’s not often a team is breaking the barriers everyone else doesn’t expect them to break... being fourth is a pretty amazing achievement.”

Despite the Sam love, his managerial record against Jose is not very good. The Portuguese is unbeaten against the Englishman in eight matches, winning five and drawing three against Bolton and West Ham over the last decade.

Allardyce’s most recent triumph over Chelsea, in December 2012, was against Rafa Benitez – but at least he knows it can be done.