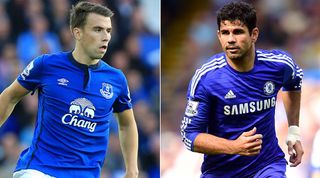 Two down, 36 to go, and all is going swimmingly aboard the Good Ship Mourinho. Newly promoted pair Burnley and Leicester have been suitably dispatched with Diego Costa bagging poacher's goals in both games - the sort of strikes Jose was lamenting the lack of last season in the sort of matches Chelsea were susceptible to losing.

So all eyes will be on Merseyside come Saturday teatime to see if Chelsea's now seemingly complete squad can pass their next test by negotiating the trip to Goodison Park; one they failed just under a year ago when Steven Naismith's header consigned Mourinho to his first league loss since returning to Stamford Bridge.

Gary Cahill believes the Blues have proved they've learned the lessons from last season's mistakes by making the perfect start to this campaign against 'lesser' opposition, saying: "The first two games have been very important for us. We slipped up last season in games which people expected us to take points from but the league isn't as easy as that - you have to fight every time you take to the field."

The word 'perfect' was also being bandied about by Everton boss Roberto Martinez last Saturday evening, but in the Spaniard's case it was 'almost perfect' after his side threw away a two-goal lead against Arsenal. Nevertheless, seeing Aaron Ramsey and Olivier Giroud score in the latter stages wasn't enough to dampen his mood too much after what he described as a "phenomenal" display.

"For 70, 75 minutes it was the perfect performance - very similar to the one we had not that long ago when we faced Arsenal," Martinez said. "The first-half display was full of dynamic football, full of energy. We were really strong every time we went forward. Scoring the two goals should have been enough to control the game. I just felt that certain individuals and as a team… we dropped our energy levels."

Dropped for two games running, after conceding late on to draw 2-2 at Leicester on the opening day. A slight cause for concern, yet Seamus Coleman isn't putting successive late lapses down to a lack of fitness.

"I think we're as fit as any team – we've got a lot of fit lads," he said. "We know we can give anyone a game if we all click and get it right for the full 90 minutes. We're a top, top team. The manager will work with us to cut out those errors and like a top team we need to brush ourselves down and kick on again."

A "minor muscular injury" threatens to sideline Costa, which would be a significant spanner in the works for Mourinho's plans. If the Spain international is unfit, Didier Drogba is likely to get the nod over Fernando Torres. Chelsea's only other absentee is expected to be Andre Schurrle, who has hurt his leg.

For Everton, Romelu Lukaku is now free to line up against his former employers having made his loan move permanent, while Samuel Eto'o has agreed a two-year deal with the Toffees. "The only thing I have to say about Mourinho is to thank him," said Eto'o.

Christian Atsu, on loan at Everton from Chelsea, won't take part, while Steven Pienaar joins Ross Barkley, Arouna Kone and Bryan Oviedo on the sidelines after injuring his groin against Arsenal. On the plus side, Darron Gibson, out since last October with anterior cruciate ligament damage, is fully fit.

While Messrs Costa, Courtois and Fabregas have hogged the headlines in the opening two ties, the Serbian stopper has quietly gone about his business and proved to be one of the Blues' key assets. At Burnley, Ivanovic completed all 16 of his passes in the attacking third on top of scoring at Turf Moor. And he was even more of a threat back at the Bridge against Leicester, playing a key role in Costa's deadlock-breaker as well as firing in 3 efforts himself and completing 3/3 take-ons (2 of them inside the opposition penalty area). While his defensive attributes are likely to prove more of an asset against a potent Everton attack, the former Lokomotiv Moscow man will be eager to have an influence higher up the pitch when the opportunity allows.

Two Iberian bosses who came out of last weekend's games in contrasting moods. Mourinho was critical of his "lazy" team who needed a wake-up call at half-time and an inspired save by Thibaut Courtois before eventually breaking down Leicester.

"I told them [at half-time] the way we were playing was not good enough to win the game and that we were in risk," he said. "It is impossible to play football if you don't win one single second ball. So, basic things, but important things. In the second half, we were much more aggressive and won the second balls. We have lots of work to do.

"You can never stop thinking you can improve and our first half showed clearly we have to improve. The team was lazy in the first half. The second half was good and it is important not to lose points at home."

Martinez, meanwhile, is happy with where his team are going even if they have surrended points late on in each of their opening two encounters.

"The disappointment is the result, but the performance is phenomenal," said the Spaniard. "It gives a clear direction of where we have to work because it was a performance of an early moment of the season where we couldn't maintain it for 90 minutes. But for the long spells of the game it was a performance that deserved the three points and we felt really dominant against a really strong side.

"The two games we have played, we are the ones responsible for us not getting three points. But it gives you a real excitement looking forward, if we can correct and improve our levels it gives us fantastic potential."

A score draw that Martinez is much happier about than Mourinho. 1-1.