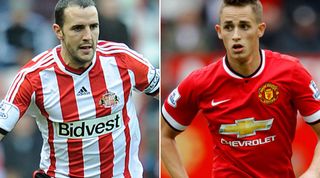 Then Swansea, who had been turned over with ease in Moyes' opener, went to Old Trafford and humbled Van Gaal, forcing him to abandon his back three by half-time and redouble his efforts in the transfer market. After a quite possibly overcelebrated pre-season, United seem a team in flux again.

Can Sunderland pour salt in a Swansea-shaped wound? They have previous: in January, after the Swans engaged in the growing fashion of visitors winning at Old Trafford by handing United only their second FA Cup Third Round loss in 30 years, Sunderland made it worse by reviving the almost forgotten art of beating United in a domestic semi-final. Symbolically for the Moyes era, United limped out of the League Cup at home, via a haphazard penalty shootout, in the semi-final: close, but only a comically exploding cigar.

But while Sunderland have recently given Old Trafford nightmares – they popped back later in the season to spoil Ryan Giggs' day with a 1-0 win – they have long been the most generous of hosts.

The last Sunderland player to score a home league winner against United was John Mullin in one of Roker Park's final games. At the Stadium of Light, Sunderland have never beaten United, who have won 11 of the 14 clashes there. Even Moyes' United took three points there last autumn, thanks to Adnan Januzaj.

Furthermore, Sunderland are also a team in flux. After that frantic fairytale ending to last season, the summer transfer window has been somewhat underwhelming. Gus Poyet has signed half a dozen fairly undistinguished journeymen: Costel Pantilimon, Patrick van Aanholt, Billy Jones, Santiago Vergini, Jordi Gomez – none are walking disasters, but few will quicken the fans' step toward the stadium. While hoping that Jack Rodwell and Will Buckley fulfil their potential, Poyet will be desperately trying to convince Fabio Borini to follow last season's loan with a permanent move.

Sunderland could really use the Italian's tireless endeavour to threaten United's back-line. Van Gaal's preferred 3-4-1-2 worked for a Dutch side happy with minority possession, but while it permits an attacking trio of Wayne Rooney, Robin van Persie and Juan Mata, there are serious holes for Van Gaal – and United's chief cheque-signer Edward Woodward – to fill further back.

The Dutchman caused a social-media buzz at 2pm last week by selecting academy graduates Tyler Blackett and Jesse Lingard at left centre-back and right wing-back respectively, but just as eye-opening was his faith in Ashley Young as a left wing-back: surely the squarest peg. With Luke Shaw injured, Van Gaal may hope to rush Marcos Rojo into service at wing-back and persist with Blackett, who did little wrong against Swansea. As he will surely be reminding Woodward, he has few other defensive options in the absence of Patrice Evra, Rio Ferdinand and Nemanja Vidic, whose departures were hardly a shock.

Last season, Sunderland proved themselves capable of beating the top teams. Whether United still count as a top team is perhaps a moot point, but a home win here would provoke overdue delight on Wearside – and increase the scrutiny on Van Gaal and Woodward.

Cue trumpets: Van Persie comes riding through the glen to assist his compatriot gaffer. Nearing match fitness, the forward is expected to make a very welcome return to United's line-up, allowing Van Gaal to field that attacking trio of brio.

In less happy news, picture the panic as Van Gaal is told that one of his players has suspected ankle-ligament damage; now make your own punchline when he finds it's Marouane Fellaini.

The bouffanted Belgian, who twice knocked his ankle ligaments at Everton, needs a second set of scans to assess the damage, not least to his resale value. Lingard, who was pictured last Sunday on crutches and in a cast, is also out of the picture but fear not, academy fans: Tom Cleverley's over his 24-hour bug.

By contrast, not much in the way of team news up at Sunderland, just transfer whispers about Danny Welbeck, Eduardo Vargas and that man Borini.

Perhaps more peripheral than they would have wished last season – Smalling often at right-back, Fletcher frequently injured – these two find themselves back at the heart of things, but will want to do better than last weekend. At West Brom, Sunderland's central striker didn't have a single shot, only completed one pass in the final third and only won one header in the Baggies' half (green arrows indicate headers won, orange lost). At the heart of United's three-man back-line against Swansea, Smalling was far from disastrous, with a high pass rate and a match-leading 7 aerial duels won, but no Red Devil will remember the game fondly.

Poyet has a good record against United; having taken over immediately after that home league defeat last October, he has presided over that May win at Old Trafford, plus the aggregate victory in the League Cup semi-final – each leg a 2-1 home win, although Sunderland's "defeat" at OT quickly begat penalty joy. Van Gaal may not be able to find Sunderland on a map, but presumably that's the coach driver's job.

Both were better away than at home last season, and Van Gaal's system suits the road. United's front three need to make up for their young back-line and weak midfield, and should just about manage it. 1-2.