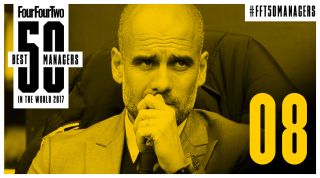 Guardiola arrived in British football during one of its more introspective moments. Still emboldened by residual self-importance yet increasingly insecure of its place, the arrival of the continent’s foremost ideologue was a curiosity and a threat; someone to celebrate, but also to knock down.

Reliably, the atmosphere surrounding his maiden season at Manchester City was a swirl of contrasting viewpoints. During his first two months at the Etihad, Guardiola’s side glided across the country and pulsed with invention and life. Here he was, doing what he does.

Then came White Hart Lane and a humbling lesson in the autumn sun. City were bullied by Tottenham in a 2-0 defeat at the start of October and nothing was ever quite the same again. Guardiola would finish a distant third in the Premier League, while also suffering a chastening exit from the Champions League at the hands of Monaco.

Measure of the man

Still, it’s a measure of the manager involved that he was able to separate himself from his side’s issues. The memory of what Guardiola achieved at Barcelona and Bayern Munich remains so vivid that City’s inability to conform to the same pattern of success is, quite reasonably, seen as more of their doing that his.

The slick build-up phases haven’t really materialized, and neither has the complex attacking movement which he virtually patented over the previous decade.

Barca and Bayern each became synonymous with a particular brand of attacking football, but part of their success depended on an ability to dictate a game’s rhythm. They controlled the ball and the temperament. That hasn’t appeared in England yet and, again, that’s not something for which the head coach can entirely be blamed.

If Guardiola’s entrance piqued the neutral interest, it also shone an unflattering light on the squad he inherited. City had been top-heavy for a long time, but maybe the extent of that oversight only became apparent last season.

The impact of players such as Sergio Aguero, David Silva, Kevin De Bruyne and Yaya Toure has been so pronounced, that to focus on the squad’s weakness has seemed contrary. Quibbling over centre-half partnerships and aging full-backs, for instance, has been to ignore the obvious, overwhelming firepower.

Not now, though. Because Guardiola’s style has become so familiar, the football public know how his teams are supposed to look and act - and that this one has failed to adapt itself to his purposes has helped to reveal it for what it is.

If he can’t get them to play, there really must be a problem.

Barely a week after the season finished, City’s executives rolled out the heavy guns: Bernardo Silva has been snatched away from Monaco for £40m and Benfica’s goalkeeper Ederson followed for only marginally less. The Claudio Bravo punchline has been retired from the City set, and the implication of the spending is clear: ‘It’s our fault, not his'.

Support from the back

Ever since Txiki Begiristain and Ferran Soriano arrived in Manchester, the club has been preparing for this moment. Manuel Pellegrini may have been a fine manager, but he was never quite able to shed his placeholder identity and the club was never entirely convincing in their support for him.

Now though, with the right structure in place and the continent’s premier name manager at the helm, a new aggression is starting to become apparent. That’s bad news for the rest of the country: if this early pattern continues and City continue to shower Europe with banknotes, the 46-year-old Guardiola will eventually have a squad which has been assembled specifically for him. Tactically dexterous and technically unrivaled, it will serve to amplify his extraordinary range of abilities.

As the money has flooded into the game, certain managers have been accused of relying on their chequebooks too heavily. While Guardiola’s career has benefited from opulent resources, both financial and human, the magnitude of his success has depended on a distinct set of characteristics: his attention to detail and his uncanny ability to dictate rather than follow the game’s trends.

Given that those two forces will inevitably collide at City, this part of his career could prove to be the point at which he fortifies his position at the game’s summit for good.