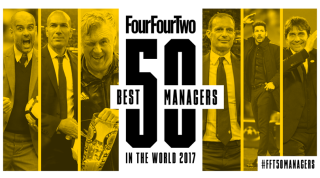 For some years now, O’Neill's star has not just been on the rise, but on an ever-steeper trajectory. This summer, Stuart Dallas’s stoppage-time strike in Azerbaijan snatched a win that strengthened Northern Ireland’s grip on second place in their World Cup qualifying group: they have won four of their six fixtures so far, and sit behind only Germany in Group C.

If this seems unspectacular, consider that when O’Neill took over as coach in 2011, the side had just finished second-bottom of their qualifying group for Euro 2012, above only the Faroe Islands, with two wins from 10 games.

Taking Shamrock Rovers into the Europa League was no mean feat, and last summer he didn’t just guide Northern Ireland to their first ever European Championship (and a first major tournament since the 1986 World Cup), but took them into the knockout rounds too. Such achievements may seem low-key compared to those of his peers, but factor in resources and his CV begins to look mighty impressive.

His transformation of a sorry Northern Ireland side into one overflowing with tenacity, shrewdness and no little attacking threat has been genuinely remarkable (Kyle Lafferty especially has been reinvigorated under his supervision, averaging two goals every three games in the last two qualifying campaigns). Whispers of a move to the Premier League continue to grow louder.

“When you grow up and spend your childhood between Brazil and Argentina, two of the biggest football powers, you learn that if you want to excel, you have to leave everything on the field,” Diego Alonso said in a recent interview with El Econimista. “I was an average player but thanks to my attitude, I made to the biggest leagues. We are like this in Uruguay.”

The former Atletico Madrid and Valencia striker has left the field but he’s still dreaming high – and excelling too. He won the Torneo Clausura in 2016 and Concachampions (or the CONCACAF Champions League) in April with Pachuca, and will now take the Mexican side to the Club World Cup against Real Madrid & Co. in December.

Howe arrived in the Premier League as a celebrated bright young thing of English management. Arguably, though, what he achieved in 2016/17 proves more than anything that came before.

Bournemouth had a rotten winter. Defensively porous and anaemic in attack, they failed to win a single game in any competition in either January or February. To watch them then was to see a side ready to succumb to its limitations, and without the transfer budget to make game-changing signings, Howe had to coax his existing players out of the emotional darkness.

He did it. A dramatic win over West Ham at Dean Court arrested the nosedive, and by season’s end the Cherries had marched into the Premier League’s top half.

Does Howe does receive extra attention due to the colour of his passport and his country’s eagerness for a new generation of managers? Possibly - but there’s nothing contrived about the praise he receives. With due respect to his players, he's taken an ordinary group of footballers, improved many of them individually, and will soon lead them into their third successive top-flight season. And he’ll have done that while spending tens of millions of pounds less than many of the managers who he has outperformed.

It took the former Liverpool boss only one season to not only restore his reputation, but write his name into the history books of Scottish football.

The Celtic fans dubbed his arrival as the ‘Rodgers revolution’, and the 13,000 expectant fans who gathered in Parkhead last summer to welcome the Northern Irishman have not been let down.

First, he took the Hoops back into the Champions League group stages after two years away. Then, in the 50th anniversary year of the legendary ‘Lisbon Lions’, he secured the club’s fourth domestic Treble, watching his team go unbeaten in the process.

Records tumbled all season long for Rodgers, but perhaps the biggest impact he has had in Glasgow has been in turning around the form of previously underperforming members of the squad.

The likes of Stuart Armstrong, Dedryck Boyata and even captain Scott Brown have gone from frustrated figures to star men within 12 months, while others like Moussa Dembele and Scott Sinclair have also shone under his tutelage.

Berdyev's ability to turn ordinary players into classy performers is incredible. It’s difficult to find a coach of such tactical brilliance, but the 64-year-old Turkmenian seems to have a Midas touch. He built Rubin Kazan from scratch, led the previously anonymous club to two Russian championship titles in a row in 2008 and 2009 – and achieved success in the Champions League too, beating Barcelona at the Camp Nou.

Berdyev's miracle job with Rostov in recent years has been even more sensational. He took over in December 2014 with the club in total disarray and on the way to relegation. Berdyev saved them and turned a bunch of little-known underperformers who went unpaid for long months into title contenders, although they narrowly missed out on lifting the trophy in the end.

Rostov made headlines in Europe too last term, beating the likes of Anderlecht, Ajax and Bayern Munich in the Champions League. Berdyev returned to Rubin this summer – and you should expect them to excel again under his guidance.