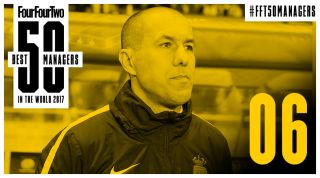 Has there been a more low-profile manager of a high-achieving team in recent memory than Leonardo Jardim at Monaco? The Portuguese maestro has masterminded the transformation of the Riviera-based outfit into Europe’s most exciting side over the past 12 months – and all the while has managed to stay in the shadows.

In contrast to some of his peers, there’s no gegenpressing or possession-devotee label you can readily pin on Jardim. He’s garnered few of the plaudits the likes of Thomas Tuchel and Pep Guardiola attract, for example. Having dumped both of those men out of the Champions League en route to a semi-final place in the spring, however, the Venezuela-born coach is hardly likely to be too worried about that.

Leading Monaco to their first Ligue 1 title in 17 years – and, in doing so, knocking off their perch a PSG side many had deemed domestically invincible – was impressive enough. But also reaching the last four of the Champions League and playing a brand of brilliant, high-risk football that thrilled fans across the continent has forced critics to sit up and take notice of the job he’s doing.

Having turned to coaching at 27, Jardim has plenty of experience – yet he’s more of a junior than you may realise. Despite the hangdog expression and pallid-grey features, he’s still only 42, making him a year younger than Tuchel, three younger than Mauricio Pochettino and four years Guardiola's junior.

When he took the Monaco post in 2014, he was a surprise appointment and there were doubts about his credentials. A competent but unremarkable CV that counted Braga, Sporting and Olympiakos among his former clubs led many to believe he had been picked as a safe pair of hands who would keep Monaco pointing in the right direction, while being too unimportant in his own right to stop agent Jorge Mendes wielding considerable influence among the decision-makers at Stade Louis II.

While there may be some truth in that particular theory – and Jardim’s Portuguese connections probably did him no harm – he’s far from a yes man. An understated yet skilled communicator, he’s picked his path adroitly through the corridors of a club that has seen various factions vying for supremacy in recent times.

His relations with Monaco owner Dimitry Rybolovlev are cordial, but he’s worked successfully with his day-to-day boss, vice-president Vadim Vasilyev. He also showed his steelier side when he stayed and Claude Makelele left after the ex-France midfielder’s ill-conceived six-month spell as technical director last year.

For all Monaco’s high-scoring exploits, Jardim can hardly be described as unashamedly attack-minded: the team may have scored 107 goals in Ligue 1 last season but they netted just 57 and 51 times in his first two years in charge. Instead, he’s a pragmatist who refuses to be wedded to one system or philosophy.

His skill is in sifting through players the club’s much-vaunted recruitment department supplies him with, and lining them up in the most effective way possible.

Last season, Jardim got virtually all his big calls right. Permanently converting Brazilian Fabinho from a right-back to a midfielder was a masterstroke. Using Bernardo Silva and Thomas Lemar as wingers even though both men prefer playing centrally bore rich fruit. And he found a way to welcome Radamel Falcao back into the fold after two disastrous seasons in England, and rejuvenated the Colombia striker’s flailing career.

Jardim was brave, too: not every coach would have encouraged full-backs Djibril Sidibe and Benjamin Mendy to attack with such thrilling abandon, often at the same time. Jardim did, and it paid off handsomely. The decision to hand Tiemoue Bakayoko a midfield berth ahead of Joao Moutinho may look like obvious now, but was anything but when Jardim made it last year.

Having established himself as one of the continent’s most in-demand coaches, the question is: what now? Will Jardim stay at Monaco and build on a remarkable 12 months, or seek a new challenge abroad? Is he already being lined up to succeed Arsene Wenger at Arsenal one day, as some reports suggest?

Jardim recently extended his deal at Monaco until 2020 – but is that relevant? Everybody in football knows contracts are simply bargaining tools. Monaco’s transfer strategy over the past couple of years has been famously to buy players cheaply and sell them on when the time’s right for a handsome profit. It would be no surprise at all to see that policy extended to their manager in the not-too-distant future.