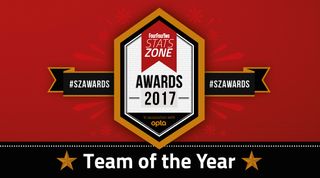 It's fair to say that Heaton was busier than most of his fellow goalkeepers in 2016/17, yet he rarely let his concentration slip as he helped Burnley secure Premier League survival.

His record of 10 clean sheets was beaten by Petr Cech, David de Gea, Fraser Forster, Hugo Lloris and Thibaut Courtois - but Heaton made more saves (141) than anyone else, while a save percentage of 74.6 was second only to Lloris and Cech.

Clyne isn't generally hailed as being the most attack-minded of full-backs, but perhaps that's unfair. Of players in the England international's position, only James Milner created more chances this season – and he took many of Liverpool's set-pieces.

Clyne was defensively solid too, making 80 tackles, 43 interceptions and playing his part in the Reds' 12 clean sheets. The former Southampton and Crystal Palace defender, who spent much of his time in advanced areas of the pitch, was also steady in possession, posting an 83.39% pass-completion rate.

Chelsea's Mr Dependable barely put a foot wrong as Antonio Conte's charges swept all before them en route to the Premier League title. Though having predominantly played on the right-hand side of a back three, he contributed in every phase of the game.

As well as being an essential part of a defensive unit which managed 16 clean sheets, the Spaniard completed 87.22% of his passes and created 22 goalscoring chances for his colleagues.

Burnley defender Michael Keane has been linked with big-money moves to Liverpool and Manchester United this summer, but it's his centre-back partner who earns a place alongside Azpilicueta in the Stats Zone Team of the Year.

Defensive statistics, more than most other positions, are primarily descriptive (Burnley's centre-halves were always going to be busier than their counterparts at, for example, Manchester City), yet Mee's solid all-round score is nevertheless worthy of recognition. As well as making the most blocks in the division (44), the 27-year-old finished second for clearances (299) and 10th (73) for interceptions. Fine work all round.

Monreal has been playing as a left-sided centre-half in a back three recently, but he still spent the majority of the 2016/17 campaign at left-back.

His record of 91 tackles was bettered only by James Milner, who Monreal edges out by virtue of his vastly superior interception success (88 to 44), clean sheets (11 to 10), blocks (11 to five) and pass completion (85.63% to 79.73%). He also provided only one fewer assist, despite the fact that the Liverpool man took a large proportion of his team's set-plays.

You probably won't be surprised to be reminded that Kante is rather good at regaining possession for his team: the France international made 127 tackles and 82 interceptions for champions Chelsea in 2016/17. Although Idrissa Gueye recorded more of the former, and Romeu more of the latter, it's worth remembering that the Blues tended to see more of the ball (and therefore find themselves defending less) than Everton and Southampton.

It would be wrong to see Kante as a ball-winner and nothing else, however – the diminutive dynamo was also superb with the ball, achieving an 88.8% passing success rate through the campaign.

Claude Puel likened Romeu to Kante before Southampton's trip to Chelsea in April, and it's not hard to see why. The Barcelona academy product, who spent four years on the Blues' books between 2011 and 2015, topped the interception charts with 90 and made more tackles (117) than all but Idrissa Gueye and Kante.

Romeu also contributed with the ball, finishing eighth in the list of most prolific passers with 2,072, 84.27% of which were successful in finding their target. He will certainly not be short of suitors this summer.

Eriksen has finally begun to receive the credit he's long deserved this season, which has been his most impressive since joining Spurs from Ajax in summer 2013. Eight goals puts him above every midfielder but Dele Alli, Eden Hazard, Son Heung-min, Sadio Mane, Philippe Coutinho, Michail Antonio and Gylfi Sigurdsson - but it's creation rather than conversion where his strengths lie.

The Denmark international fashioned more chances (112) than anyone else in his position, 15 of which went down as assists. And only one player (Kevin De Bruyne) could beat that.

Having conserved plenty of energy by taking the 2015/16 season off, Hazard was back to his very best this term. Only Wilfried Zaha (142) and Adama Traore (136) got anywhere near his league-high 143 successful take-ons – Manuel Lanzini was a distant fourth with 88 – while he was directly involved in 21 of Chelsea's 85 goals, with 16 strikes and five assists.

It's little wonder Real Madrid are supposedly sniffing around the 26-year-old, who finished second to N'Golo Kante in both the PFA and FWA Player of the Year awards.

Sanchez spent most of his first two seasons at the Emirates Stadium playing as a wide forward, but Arsene Wenger deployed him through the middle for much of 2016/17 and was rewarded with the Chilean's most productive campaign yet. Sanchez netted a total of 24 goals, an inferior record only to Harry Kane and Romelu Lukaku, while no forward created more chances than his 78, and only Sergio Aguero took more shots (139 to 129).

Gunners fans will be desperate to see the former Barcelona attacker put pen to paper on a new contract in north London.

For the third season in a row, Kane broke the 20-goal barrier in the Premier League as he fired Tottenham to their first top-two finish since 1963. A remarkable seven goals in the final two games of Spurs’ season helped make this his most prolific year yet – 29 goals in 30 top-flight appearances was enough for him to win the Golden Boot – and he also provided seven assists.