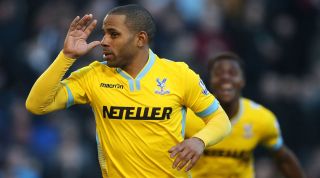 His quick-breaking strategy is ruthlessly focused on attacks down the wings, with central midfielders instructed to clear the ball to the flanks as quickly as possible; 76% of his Newcastle team's attacks came down the channels, more than any other side in the division.

In both of Pardew's 2-1 victories over Spurs, his team moved the ball down the wings time and time again.

Some were surprised when Pardew chose to swap Tyneside for south-east London, but as we highlighted upon his arrival, Palace were already perfectly set up for his system.

With a host of fast, skilful forwards at his disposal – see Jason Puncheon, Wilfried Zaha, Yannick Bolasie, and Dwight Gayle – it is no wonder Pardew has hit the ground running. All four of these players are flourishing in their new direct, expansive roles, with Palace averaging a staggering 25 crosses per match.

Crystal Palace already have all the hallmarks of an Alan Pardew team.

Arsenal fans should be worried. Remarkably, they have conceded from crossing situations 18 times this season, representing 64% of their total goals conceded.

On Saturday, Palace will lure Arsenal forward by allowing them to dominate possession, and then spring counter-attacks down both channels, catching full-backs out of their positions.

In the defeat to Stoke back in December, who scored three times from crosses (either directly or from resulting goalmouth scrambles), Arsenal's full-backs were punished.