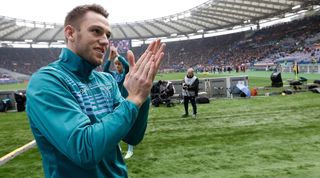 Stefan De Vrij – whose surname translates as 'the free' (no, not 'the fridge') – was born in the tiny southern Dutch village of Ouderkerk aan den Ijssel (population: 5,700) in February 1992. He spent five years playing for local amateur side VV Spirit before being snapped up by Feyenoord after impressing at a training day aged 10 in 2002.

Initially deployed as a midfielder, De Vrij's coaches in Rotterdam converted him into a right-back before moving him inside once more to the centre of defence. He signed professional terms in 2009 and made his Eredivisie debut against Groningen soon after.

De Vrij’s consistent performances led to him becoming one of the first names on the team-sheet and, in spite of his tender years, Feyernoord boss Ronald Koeman had no qualms about handing him the captaincy as a 20-year-old in 2012 when the incumbent Ron Vlaar departed for Aston Villa.

After a fine World Cup in Brazil in which the Netherlands reached the semi-finals, De Vrij left his motherland to sign a four-year contract with Stefano Pioli’s Lazio. The Rome-based outfit have taken Serie A by storm this season, surging up to second after a recent run of eight consecutive wins that was halted only by the juggernaut that is Max Allegri’s Juventus.

Although he has missed parts of the campaign through injury, De Vrij has been a huge part of Lazio’s solidity: only Juve and Roma have conceded fewer goals than the Biancocelesti’s 31 in 2014/15.

After a superb season in the Italian capital, De Vrij is hot property. He has improved year-on-year since making the breakthrough at Feyenoord as a teenager; still only 23, there is plenty of room for further development yet. Lazio’s likely qualification for the Champions League means the Dutchman will be able to test himself against some of the continent’s best attackers in Europe next term if he decides to stay put. There are likely to be a number of suitors for him this summer, though, with Louis van Gaal’s Manchester United reportedly keen to tie up a deal for the centre-back in the coming months.

Liverpool have also been linked this month but the chance to link up with Van Gaal again, coupled with prospective Champions League football at Old Trafford, could prove a much stronger lure.

De Vrij is an excellent all-round defender. His reading of the game is superb, and it's rare to see him caught out of position or oblivious to where his direct opponent is. The Dutchman is also always switched on and aware of where he should be: his concentrations levels are high at all times and he has been known to sweep up and cover for his defensive colleagues when they've gone AWOL.

In true Dutch fashion, the 23-year-old is also comfortable in possession, happy to carry the ball forward when given space in front of him to run into. His ability to pick a pass is a big plus point too, with the Lazio man always keen to get involved in the attacking phase of the game by beginning moves from the back.

He has made improvements as he has matured, but the suspicion that De Vrij does not relish physical battles as much as some other centre-backs persists. He was often criticised in the Dutch press for being weak in one-on-one duels and seems to perform at his best alongside a more combative figure like Vlaar, who enjoys direct tussles with strong centre-forwards. De Vrij isn't the most dominant aerially either, though he does win more duels than he loses (56% this season).

Dutch centre-halves presumably sit up and listen when Frank de Boer, winner of 112 caps for the Netherlands and a man who won six league titles and a Champions League as a player, has something to say. When asked about De Vrij last year, the former Ajax and Barcelona man was full of praise.

“He's made a big step,” De Boer said. “He takes risks in his actions at the back. I used to always do this also, I do like that. He always tries to tempt his opponent to attack him.”

With a number of De Vrij’s compatriots currently plying their trade in England, the 23-year-old wouldn't be short of options if he wishes to join them for a bowl of bitterballen. Ronald Koeman, however, is one man the defender will presumably be in no rush to exchange pleasantries with.

The pair dramatically fell out when the Southampton manager was in charge of Feyenoord in 2013. After De Vrij was found to have been participating in individual training sessions without the club’s permission, he was stripped of the captaincy and heavily reprimanded by his boss in private. As scandals go, additional training ranks below even the occasional inhalation of legal nitrous oxide by teenagers, but Koeman was adamant and the armband was handed to Graziano Pelle.

The reports linking De Vrij with Manchester United refuse to go away. Although his Lazio deal runs until the summer of 2018, it is difficult to envisage the Biancocelesti being able to keep hold of the Dutchman should his fellow countryman Van Gaal come calling.

The signing would make perfect sense from the Red Devils’ perspective. Notwithstanding recent defeats to Chelsea and Everton, United’s results and performances have improved immeasurably of late, but there is a feeling that their centre-back pool of Phil Jones, Chris Smalling, Jonny Evans, Marcos Rojo, Paddy McNair and Tyler Blackett will require significant strengthening should a title challenge be forthcoming next term.

De Vrij, Lazio’s Dutch rock, could be the man to do just that.

Discover more about the players you need to know at FFT.com