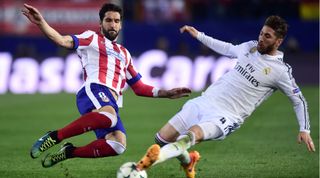 Gah. There’s just too many proper, decent, meat-pie games going on this weekend. Indeed, if LLL were to write about all the juicy goodness, to the last dribble, then FFT would run out of internet. Athletic and Valencia do battle to restore honour in San Mamés. Deportivo look to continue a weirdly sprightly start to the season at Granada, a team heading in the opposite direction, while Rayo host Betis, a game that will be the football equivalent of pouring six bags of space dust and a bottle of pop into your mouth.

Will Real be more Atlético than Atlético?

And so the master plan of Rafa Benítez is just days away from fruition - the über strategy of making Real Madrid a little bit more like Atlético Madrid. After some early aberrations in Europe and La Liga with 14 goals being scored and none conceded over three games, the Rafa plan is back on track with Madrid grinding out low-scoring wins - and the odd goalless draw - with no fuss and nonsense. All very Atlético.

The problem for the opposition over the past week is that Atlético’s balance has been knocked off kilter a little, like a TV set at slightly the wrong angle. The narrow margins that Diego Simeone’s side plays with have worked against the team in the past two games with a couple of defeats with single-goal gaps, rather than the usual victories. What Rafa will now be concerned about in the Madrid camp is whether this will knock the confidence of the Rojiblancos going into a league match where Atleti absolutely stuffed Madrid 4-0 last season, or if the team will be galvanised, pumped up and back to being ‘hombres’ as the Calderón coach will no doubt promise. LLL is not entirely sure of the turn-out this time, with Rafa’s tactical strengths - unexciting and conservative - potentially working to the team’s advantage on Sunday.

Can the league leaders recover from Europa League ‘loss’ against Levante?

The little stat-o-metre on LLL’s mega screen is showing four straight wins in all competitions for Villarreal, and five in a row in the league. The last of those was Thursday’s victory over Viktoria Plzen. But in LLL’s mind, the 1-0 win was a bit of a loss as it only adds to fuel to the fire of a Europa League campaign that can only drain the batteries of the Yellow Submarine in a domestic season which is full of promise.

With Sevilla and Valencia otherwise engaged in the Champions League - and neither particularly hot to trot - the force is strong in Villarreal, strong enough to perhaps make the top four. Those chances can only be weakened, though, with the team plodding around Europe every few weeks.

At least Villarreal had a home game on Thursday and only have to make the short trip to take on a Levante side that has not won in La Liga since May, a run of 10 games. However, the Valencia outfit are stubborn enough to grind out a draw to make the team’s historical perch at the top of the table a short one.

Some may have got the hint, over the years, that La Liga Loca has not got a huge amount of time for either Barcelona or Real Madrid and tends to enjoy the various downtimes of both teams. That stems from the blog being beholden to sides with no resources or any ability to win football matches. Ever. It also reduces the “you are pro/anti Real Madrid/Barcelona emails” to a mere trickle.

So, LLL is rubbing its paws in glee to see which Barcelona player will come a cropper this week - but in a non-harmful, tweaking, Andrés Iniesta way. The midfielder is the latest Catalan casualty at the Camp Nou, a footballer who might have been useful in an away clash against a Sevilla side that could be spirited and sprightly in front of their home crowd on a big afternoon (daylight for this game? Really?) or utter garbage.

In the same way that the blog has no clue over what will happen in the Madrid derby, LLL hasn’t a clue in this one. The one thing it does know is that Neymar is going to have to pull something special out of the bag, with the sense that the tide is turning on the popularity of the footballer at the Camp Nou.

Can Celta go wild over the long weekend?

Playing on a Friday is a bit of a curse for clubs and fans alike, but for two teams heading into an international break without that many decent players, the scheduling can offer up two extra days holiday. LLL has a feeling that Celta will enjoy the weekend even more with the blog calculating that the fourth-placed side has a 22% chance of going into the Fortnight of Despair back on top of La Liga.

The opponents, Getafe, are guaranteed to offer up no resistance whatsoever, leaving Celta a clear path to pick up a win and spend the rest of the weekend in a bar watching the rest of the top four engaged in testing tussles. Heck, the players even have the permission of the coach to head out and about, with Toto Berizzo saying that he had complete trust in his players, despite a kerfuffle from one of his charges.