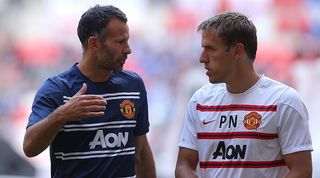 It’s far from the freshest insight to note that most positions of power tend to be held by older men. For all the fatuous Daily Mail headlines (are there any other kind?) about Theresa May’s massacre of the middle-aged white men, our society is still in thrall to greybeards. They’re seen as the arbiters of accumulated wisdom, dispensing lessons learned through experience… except by those who wish to overthrow the old guard.

In late November the football chaterati were convulsed with the conviction that hoary old geezers were being unfairly picked for Premier positions at the expense of younger, usually continental, candidates. Septuagenarian Roy Hodgson had started the trend back in September, replacing 47-year-old Ronald de Boer at Crystal Palace; then West Ham swapped Slaven Bilic (49) with David Moyes – only five years older at 54 but somehow reeking of a pre-Premier era of dubbin and Bovril.

West Brom caretaker Gary Megson (58) was another throwback, while a spiralling Everton struggled to replace Ronald Koeman (54 but foreign). David Unsworth (44, as British as boiled beef and carrots) was clearly out of his depth but Watford were unwilling to part with Marco Silva (40, excitingly exotic). Instead the Toffees turned to Sam Allardyce – 63 and thought not so much old-school as ancient, Oxford University sponsored by Wrigley’s Extra.

The price of Silva

When hired by Hull, Silva suffered a high-pitched hatchet-job from the reactionary white men of Soccer Saturday. This in turn earned him thousands more cheerleaders than might be warranted by his somewhat mixed results: Hull’s home haul of 19 points from a possible 27 was fatally undermined by collecting just two from 30 on the road, their relegation sealed with an abject 4-0 collapse at Allardyce’s Palace, while Watford have swung from one defeat in his first eight league games to 11 in the last 15.

Clearly Silva is a manager of promise and he certainly didn’t ask to become the figurehead for a changing of the old guard. It might have occured to a few of his banner-wavers that they were aboard their own selective bandwagon – just one travelling in the opposite direction. You could blame Brexit, the most polarising political shibboleth since Thatcherism, neatly slicing the country into two howling halves of demography and demagoguery.

Amid the clamour for rejuvenation, facts were defenestrated. One Twitterer, best left nameless, wondered why West Brom had appointed Alan Pardew instead of a younger manager like Chris Hughton; the Brighton boss is 18 months older than Pards. Social media hysteria overlooked history: before Hodgson, five of the last six Premier League permanent managerial jobs had gone to under-50s.

Mauricio Pellegrino was 45 when appointed by Southampton. Frank de Boer was never in any danger of reaching 48 at Palace. Craig Shakespeare was 53 but untried as a manager when elevated by Leicester. Paul Clement was 45 when he took the Swansea job. Silva had been 39 when Hull took a chance and still hadn’t hit 40 when Watford did what his Tigers side couldn’t and kept him in the top flight.

None of these managerial stints went well. As in politics, most managerial careers end in failure – but some  do it much more rapidly than others.

The desire for change is understandable; familiarity breeds contempt, as anyone who’s just got through Christmas will know. The Premier League has attained global attention through its megastars, but it retains interest through its constantly evolving tactics, from the spilt striker to the inverted full-back. But the baying for fresh blood abated a little as the auld fellas proved their worth.

Starting with a win over the champions Chelsea, Moyes’s reinvigorated Hammers have racked up 15 points in their last eight league games, losing just once. Hodgson’s Eagles have gone from 20th to 12th. Allardyce arrested Everton’s slide with five wins in his first six games. Maybe West Brom would join them in the ranks of recovery if Alan Pardew had a few more miles on the clock. Meanwhile in Watford, since Marco Silva was denied a move to Merseyside his team have collected five points from a possible 30.

Neither tried nor tested

Which only makes it the more curious that some managerial positions of national importance seem to be going not just to younger men, but to men who are vastly inexperienced – some would say underqualified. There’s a new shift towards the polar opposite of the knowledgeable old warhorse: the young, untried manager catapulted into a position of power.

Ryan Giggs has been appointed by Wales despite a total of six hours’ managerial experience, having lingered long enough at Old Trafford to oversee four post-Moyes dead-rubbers – the footballing equivalent of a substitute teacher sitting in for the last week of summer term while the kids play KerPlunk.

Now he shoulders the high hopes of a nation eager to repeat the glorious summer of 2016, and the reaction has hardly been overwhelmingly positive. Much social-media mirth has been made by wags asking if he’ll turn up for friendlies, but more serious voices have questioned his right to the role. Some of those voices are the same ones which had cried out for younger managers; be careful what you wish for.

Mind, Wales have history with young gaffers. Of the five permanent managers since the wildly unpopular reign of Bobby Gould ended in 1999, Giggs is actually the second-oldest, with only John Toshack (55 at the time) longer of tooth. Chris Coleman and Gary Speed were both 41 when appointed, while Mark Hughes was just 35.

Perhaps the Welsh FA are hoping that Giggs can be as invigorating as Hughes, as respected as Speed and as successful as Coleman. It’s harder to guess what their counterparts at St George’s Park are thinking if the rumours are true and Giggy’s old mate Phil Neville becomes the next manager of England Women. He’s arguably not even the most qualified Neville sibling for the job: twin sister Tracey has coached the England side for nearly three years, albeit at netball.

Some have defended the (rumoured) decision by saying the hiring of such a well-known ex-player would be good for the profile of the women’s game. There may be justification there, but there’d be more if Fizzer wasn’t among the most widely pilloried players of the Premier era. True, some of that criticism was unfair, but the flag of fairness offers no protection to a freewheeling banter-wagon. Neville’s appointment would be a dream gag for precisely the kind of idiots who delight in derogating women’s football.

The FA are pathologically determined to make women’s football as professional as possible, even if it means effectively driving clubs out of existence. Controversial as this is, the advantages were evident in the great leaps under Mark Sampson – the women’s national team have enjoyed the same centralised thinking that has greatly improved the (male) youth teams so impressively of late.

Curious, then, that the FA should consider such a throwback, will-this-do appointment. In truth, they have had an ever-dwindling pool of applicants, not helped by mismanaging the balance between taking your time and dragging your feet.

Sampson was sacked in September; the following month, Chelsea manager Emma Hayes – who had been “flattered” to be linked with the national job – was tied down to a Blues contract until 2021. By December, Nick Cushing – manager of the WSL1’s other major force, Manchester City – had withdrawn his application and signed a similar extension.

Then there’s the gender issue, increasingly important in women’s football as well as a wider post-Weinstein world. It’s difficult to imagine that the FA wouldn’t prefer to hire a female manager; the FA’s head of women’s football, Baroness Campbell, insists: “We are absolutely determined to get more women into coaching”. But four years after appointing Sampson while saying there was "not a woman who could step into Hope Powell's shoes,” it would be curious to overlook the caretaker manager Mo Marley in order to take a chance on Neville Minor.

Serie A in the '90s: when Baggio, Batistuta and Italian football ruled the world

The 12 most memorable football quotes of the 1990s

Furthermore, Fergie – perhaps now the ultimate greybeard sage – had done his time at various levels in Scotland, up to and including somehow conquering Europe with Aberdeen. That drive has to come from somewhere, and perhaps it simply isn’t as evident in the generation of players who got seriously rich in their twenties. While Giggs has barely bothered perusing the job ads, Phil Neville’s toughest decision has been what shirt to wear on MOTD2.

In the end, there’s no template for a successful appointment, but it’s usually better not to follow trends for the sake of it. Another wise old man, Bob Paisley, once said: “It’s not about the long ball or the short ball, it’s about the right ball.” Like any employers, the two national FAs should be seeking neither the youngest applicant nor the oldest, but merely who is the right man – the right person – for the job.

Whether they have, only time will tell.