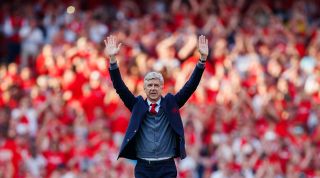 The big talking point: Burnley's lap of honour. Forget what happened at Arsenal last weekend, because Sean Dyche has achieved something truly admirable this season. Discounted as an anomaly after a good start and dismissed on account of unfavourable defensive analytics, the Clarets rode a long dip in form during winter to record a league position which shames many of the managers beneath Dyche.

What will happen: A general dropping of standards. Bournemouth have been on the slide for a while and Eddie Howe's focus will already be on the summer, while Burnley's approach depends on a level of intensity which will be very difficult to maintain. This will be a loose game of football, which will likely make it extremely entertaining or completely unwatchable.

What won't happen: Chris Wood will be absent for Burnley and, unfortunately, Tyrone Mings is back on Bournemouth's treatment table. Tom Heaton might return in goal to make his long-awaited comeback.

The big talking point: Like several other sides, this will be a day for Palace to celebrate their security. Not so for West Brom, obviously, who were relegated by virtue of Southampton's win over Swansea on Tuesday evening.

What will happen: You'd hope for some compassion from the Palace supporters - after all, they know exactly what it's like to be managed by Alan Pardew, and also how demoralising Premier League relegation can be. This is not a day for taunting, so hopefully Selhurst Park takes a day off from the tribalism.

What won't happen: Don't expect West Brom to roll over, though. They're down and have nothing to play for, but that's really been the case for some time. Additionally, these players seem to enjoy playing for Moore and his relationship with them appears to have them looking beyond the short-term. There will be departures from The Hawthorns over the summer – the wage bill demands it – but the bulk of this group seems to have already recommitted themselves mentally.

The big talking point: A day in the sun for Huddersfield and, more obviously, the final Premier League game of Arsene Wenger's career. Holds hands and take a bow.

What will happen: According to David Wagner, his players decided against taking a chartered flight back to Huddersfield, opting instead for a long coach journey with a well-stocked fridge. Given the titanic effort at the Etihad and Stamford Bridge, it would be a surprise if they got beyond second gear (and some presumably fuzzy heads).

What won't happen: Mesut Ozil won't be involved, having been ruled out with a back problem, while Laurent Koscielny is lost for up to six months with that nasty Achilles injury. Konstantinos Mavropanos serves a suspension after his red card against Leicester.

The big talking point: Simple enough: Liverpool's goal difference is so superior that they need only a draw to claim the final Champions League place ahead of Chelsea.

What will happen: They'll do it, too. Jurgen Klopp will have one eye on the Champions League final, but don't expect any reckless rotation a full two weeks before the final. One of the club's victories this season has been in improving their record against lesser sides at Anfield and, safe and with nothing to play for, Brighton shouldn't prove too stubborn.

What won't happen: However, don't expect Mo Salah, Roberto Firmino and Sadio Mané to stay on for too long if it becomes comfortable. Fantasy football owners beware: Liverpool have other priorities on the horizon.

The big talking point: The point won at West Ham - or 'mined' perhaps - secured second place for United, so their sole aim now is the FA Cup. Eight, perhaps nine spots in that team are already decided, but this will be a chance to contest those remaining few.

What will happen: Given how dreadful that performance at London Stadium was (United really do sterile football better than anyone else), a performance might be needed here just to generate some momentum - or at least positivity. It's a cliché but it's true: pragmatism isn't the Manchester United way, and until Jose Mourinho makes certain concessions he'll be surrounded by this palpable unease.

What won't happen: Romelu Lukaku remains a doubt for Wembley, so obviously won't feature here. Eric Bailly won't be included in the final either, so should start at Old Trafford, while Luke Shaw might even get a final chance to make a very late case for World Cup inclusion.

The big talking point: The Europa League looms for Chelsea. Even if they win at St James' Park, they'll be reliant on Liverpool losing to Brighton to make the top four. The story from Wednesday night was Huddersfield's defiance but, really, that was a dreadful choke in a fixture which they needed to win.

What will happen: Newcastle won't be soft. They didn't have anything to play for at Wembley against Tottenham either, but they were actually very impressive - Jonjo Shelvey was particularly vibrant and he especially might see this as a last chance to catch Gareth Southgate's eye.

What won't happen: Christian Atsu is unfit so won't face his old club, while on-loan Kenedy is ineligible. With the World Cup now just a month away, Thibaut Courtois won't be rushed back from injury and, in spite of his difficulties on Wednesday night, Willy Caballero will keep his place in goal.

The big talking point: There is a very remote chance that Southampton could still go down, but it would require a nine-goal swing in Swansea's favour. Not likely then, but still a situation which demands some focus.

What will happen: The life has gone out of City a little bit since they collected their trophy - understandably - so this game doesn't carry the same threat for Saints. Pep Guardiola will likely use the game to experiment with his squad and partially shape whatever plans he has for the summer. City will still be too strong, but that should ultimately prove inconsequential.

What won't happen: Mario Lemina remains out for Southampton, while Jan Bednarek is struggling to recover from the knock he took in south Wales. Maya Yoshida is back from suspension, though, so he should return at centre-half.

The big talking point: Swansea must win and must do so by a cricket score, but that won't be the focus here. Instead, it will be a day to vent: the home supporters are unhappy with the way the team has performed, but are seething about how their club has been run. The Liberty Stadium will be extremely hostile, turning the football into almost an afterthought.

What will happen: Even here, it's hard to see a home win. Stoke are the best of the three relegated sides, only really suffering from a lack of goals. They might not win, but - wavering focus aside - they should be good enough not to lose.

What won't happen: Sadly, it's a stretch to see either of these two returning in a hurry. Stoke have the squad but are unlikely to be able to hold on to their key performers, while Swansea have myriad issues above and beyond the team which will need curing ahead of any literal footballing concerns.

The big talking point: A great big gloat from Tottenham. Prior to Wednesday night's win over Newcastle, the expectation was of another Spurs collapse and giddy schadenfreude at the prospect. As it turned out, Chelsea were the ones to bottle it and, the rivalry being what it is, that won't be allowed to pass quietly.

What will happen: Probably several final appearances: Toby Alderweireld, Danny Rose and Fernando Llorente will all almost certainly be leaving Tottenham, while the chances of seeing Riyad Mahrez in a Leicester shirt again after Sunday seem remote.

What won't happen: Victor Wanyama and Kieran Trippier were both substituted with injuries in midweek and won't feature here, while Jan Vertonghen will likely be rested having suffered through the week with a sore ankle. Kyle Walker-Peters could get a rare start at full-back.

The big talking point: The future. Sam Allardyce is on uncertain ground at Everton, while David Moyes has issued a particularly unthreatening ultimatum, demanding that West Ham's owners match his level of ambition or seek another head coach. FFT can't think how that will end...

What will happen: Wayne Rooney will make a final appearance for Everton - and, most likely, in the Premier League. Rooney is rumoured to have agreed a move to MLS side DC United, bringing an end to a decadently successful English career. It's been a slow, sometimes painful decline, but Rooney will still be remembered as a great of the British game.

What won't happen: Depending on how quickly the FA respond to the Paul Pogba incident, West Ham might have to do without Mark Noble here - and conceivably for the first two games of next season, too.