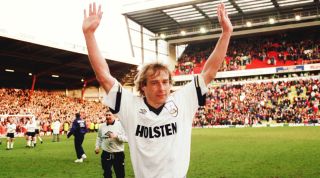 Six minutes on the clock, 25 players to guess.

NOW TRY Quiz! Can you name the 30 players with the highest market value increases this season?

Jurgen Klinsmann arrived in the Premier League when overseas stars were still few and far between.

He was one of the first of the Premier League's beloved foreigners, along with the likes of Eric Cantona and Dennis Bergkamp - on our latest cover, plug plug - paving the autobahn for more Deutch heroes to make their way to our shores over the years.

These days, Super Jurgen is the 26th most played German in Premier League history. He just misses out on today's quiz, but there are some big names above him in the standings.

As they say in Germany, are these answers as clear as dumpling broth, or do you have tomatoes on your eyes when guessing them?