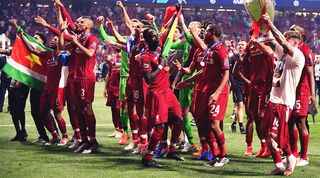 You have 10 minutes to guess 31 former clubs of Liverpool's first XI from the Champions League final last year. Of course, Trent Alexander-Arnold isn't listed: as an academy graduate, he doesn't have a former club.

THEN TRY Quiz! Can you get 50 correct answers in our Lionel Messi or Cristiano Ronaldo quiz?

It's a year to the day since Liverpool claimed their sixth Champions League trophy.

The trophy marked one of Jurgen Klopp's finest achievements in football. Liverpool were, well, far from world-beaters when he took charge. Now look at them.

Part of the genius of the project at Anfield has been taking players from all kinds of sources and melding them together to create one finished side that looks like they belong together. But can you remember who they all used to play for?

We've totalled up the former clubs of each of the Reds' Madrid heroes - we just want you to name them.