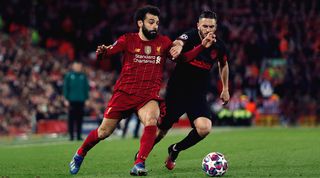 18 minutes on the clock, 220 players to guess - we've supplied the game and the score just in case.

It's been a month since Premier League footballers last kicked a ball. No, literally - have seen the videos? They're all playing with toilet roll now.

Four weeks have gone by. In that time, you'd probably have seen your side play about six times - and a lot happens in six matches. That's why it feels like a lifetime ago.

Liverpool's last result was a home loss against Atletico Madrid, while Manchester United's was a 5-0 win in Europe. Arsenal had their last match against Manchester City postponed, only for the following one against Brighton to be called off too.

We're living in boring, football-less times. Every day, another new story surfaces about the Premier League's completion date - but until that happens, let's just reminisce about those halcyon days, when Southampton were beaten 1-0 by Newcastle and Brighton drew 0-0 with Wolves.

Oh, what we'd do for a Super Sunday like that...