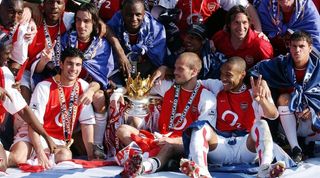 A truly remarkable side that simply had everything. Edwin van der Sar was back to his peak, while Rio Ferdinand and Nemanja Vidic were the best centre-back combination in Europe.

Further forward, Paul Scholes, Owen Hargreaves and Michael Carrick were arguably the three most intelligent English central midfielders of their generation, while the attacking trio of Cristiano Ronaldo, Carlos Tevez and Wayne Rooney rotated at will, keeping the opposition guessing. Ronaldo, in particular, was simply unstoppable – this campaign helped him win the Ballon d’Or.

The supporting cast were particularly impressive: the likes of Park Ji-sung, Darren Fletcher and John O’Shea weren’t the most revered players, but were intelligent tactical options who helped nullify opponents as part of Sir Alex Ferguson’s increasingly sophisticated gameplans. In truth, though, this United were a better European side than a Premier League one – they only defeated Avram Grant’s Chelsea side by two points.

It seems criminal to include this team rather than the famous treble winners of the previous season – the 1998/99 side’s achievements were clearly more memorable, of course.

It was largely the same team as the treble-winners: the best midfield quartet of the Premier League era in David Beckham, Paul Scholes, Roy Keane and Ryan Giggs; further forward the partnership of Andy Cole and Dwight Yorke backed up by super-subs Teddy Sheringham and Ole Gunnar Solskjaer. Mikael Silvestre provided extra pace at the back and the only weakness was in goal, where Mark Bosnich proved an underwhelming replacement for Peter Schmeichel.

Leicester’s remarkable title victory was so unexpected that it feels somehow impossible to compare it to the big boys’ successes – yet forget about them being underdogs, and it’s nevertheless a hugely dominant title victory, by an impressive 10 points. Leicester lost only three times all season.

Claudio Ranieri’s side ripped up the rulebook: whereas others were obsessed with possession play, Leicester were almost pure counter-attackers. Jamie Vardy broke the Premier League record for scoring in consecutive games, Riyad Mahrez was the league’s best player – capable of scoring, creating and assisting – while N’Golo Kante was a revelation, repopularising the tough-tackling, all-action defensive midfielder.

But overall this was a brilliant team, among the best defensive units the Premier League has ever seen in the second half of the season. When asked questions they always came up with the answers – pressing higher or going more direct with super-sub Leo Ulloa. The most extraordinarily unlikely title winners are also among the best.

Manchester United were serial title winners during the Premier League’s formative years, but this was their most dominant triumph of the 1990s: a brilliant, formidable, consistent side. They were top of the table after 40 of their 42 matches.

Tactically, it was considered a 4-4-2, although they were perhaps the first 4-2-3-1 Premier League side. Newcomer Roy Keane formed a terrifying midfield partnership with Paul Ince; both box-to-box midfielders rather than holders. Two of Lee Sharpe, Andrei Kanchelskis and Ryan Giggs provided speed out wide, while up front, the magnificent Eric Cantona orchestrated play behind a good old-fashioned targetman, Mark Hughes.

The back four was barely ever broken up – Denis Irwin was ever-present, centre-back duo Steve Bruce and Gary Pallister missed one game apiece, Paul Parker just two. Oh, and Peter Schmeichel was the league’s best goalkeeper. No one stood a chance.

This Chelsea isn’t held in the same esteem as their title-winning side of the previous season, but they were nearly as good: only four fewer points (thanks to two defeats when the title was already sealed) and the same number of goals scored. Frank Lampard was still firing, Didier Drogba improved and Hernan Crespo returned from a loan spell to contribute some crucial goals.

There wasn’t the same dynamism from Damien Duff and Arjen Robben, but Joe Cole became a regular and effectively sealed the title with a brilliant goal at Stamford Bridge against closest rivals Manchester United. Michael Essien, meanwhile, was probably the key addition, bringing yet more power to Chelsea’s engine room.

There’s something peculiarly lacking about this Chelsea side – perhaps some genuine flair and some more memorable moments. But in terms of their statistics and dominance over rivals, this is the most underrated Premier League title-winning side.

There’s a comparison with the 1999/2000 title winners to be made here: while the previous campaign is remembered more fondly thanks to United’s Champions League success, they became a better side afterwards. Whereas the previous campaign it was Avram Grant’s ramshackle Chelsea side that United narrowly overcame in the league, this time they powered ahead of Rafael Benitez’s Liverpool – perhaps the best non-title-winning side of the Premier League era.

Cristiano Ronaldo wasn’t quite so fearsome, and the absence of Owen Hargreaves was a blow, but United had added Dimitar Berbatov to their attacking options. Whereas in 2007/08 they sometimes lacked a genuine penalty box presence, the Bulgarian brought both height and guile.

Most remarkable, though, was the astonishing run of 14 clean sheets from November to late February – the most impenetrable period in Premier League history. This wasn’t a spectacular side, as United scored nine fewer goals than second-placed Liverpool, and lost home and away to Benitez’s side – but they were a brilliant unit.

It’s occasionally difficult to place modern achievements in a historical hall of fame, but no one should doubt the scale of Chelsea’s most recent title victory. In one of the most competitive Premier League seasons ever, Antonio Conte’s side recorded 93 points – the second highest in Premier League history following their 2004/05 efforts – and helped to transform the Premier League in a tactical sense too.

After a poor start, Chelsea’s autumn switch to a 3-4-3 brought a sudden run of six clean sheets and 12 straight victories which took them from eighth place to runaway title favourites. Opponents couldn’t cope with the overlapping wing-back duo of Marcos Alonso and Victor Moses, while Eden Hazard menacingly drifted inside from the left and Diego Costa banged in the goals up front.

Defensively, the three-man unit held firm, while N’Golo Kante proved the signing of the season for a second straight year, providing boundless energy and ball-winning qualities in midfield. Conte even found a place for serial assister Cesc Fabregas, having jettisoned him in the early weeks. The Chelsea title winners of two years beforehand fell over the line, but this side kept on going.

The season started slowly in an attacking sense, with an over-reliance upon set-pieces for goals. But the autumn introduction of Arjen Robben transformed Chelsea into a brilliant attacking force too; based largely around the concept of attacking transitions, he and Damien Duff sped forward to destroy teams on the break.

Didier Drogba was yet to find his feet, but Eidur Gudjohnsen linked play excellently up front while Frank Lampard broke forward constantly to become a truly outstanding attacking midfielder. Defensive midfielder Claude Makelele, meanwhile, was the crucial part of Chelsea’s 4-3-3 – a formation which outplayed opponents in the opening weeks, and was widely replicated across the league towards the end of the season.

And they didn't even win the league. But in any season prior to 2018, their points tally of 97 would have seen them crowned champions.

Despite finishing a full 25 points off first place the previous season, no one doubted that Jurgen Klopp's side would be mounting a serious title challenge this time around. Few, however, will have predicted just how serious.

Having bolstered their defence with the record signing of Virgil van Dijk the previous January, and splashing out on Roma goalkeeper Alisson in the summer, the Reds were a force to be reckoned with. Mohamed Salah may not have been quite the player he'd been the year before after recovering from injury, but still took home the Golden Boot alongside Sadio Mané and Arsenal's Pierre-Emerick Aubameyang. His partners in the Anfield attack line, Roberto Firmino and Mané, both stepped up, while Trent Alexander-Arnold and Andrew Robertson established themselves as two of the best wing-backs in the country.

In losing only one game all season – to champions Manchester City – this Liverpool side take their place not only as the best side not to win the Premier League title, but one of the best Premier League teams full stop.

Sometimes greatness requires great adversity. The Liverpool team above certainly provided that for Manchester City in 2018/19.

Having set a new record for Premier League points the previous season (and winning the title at a canter), Pep Guardiola's men had a lot to live up to. Winning their last 14 games in a row – equalling their own record from the year before for most wins in a season – helped provide a first back-to-back title for the club. Had they failed to win any of them, they would have handed the title to Liverpool, who finished just a single point behind.

With creative force Kevin De Bruyne missing much of the season through injury, midfield stalwart Fernandinho reaching a less-than-sprightly 34 years of age by the end of the campaign, and captain Vincent Kompany both injury-prone and 33, City regularly showed off their depth. In the end, though, it was a number of usual suspects who became the faces of victory: Sergio Aguero was every bit as clinical as he always was, Raheem Sterling reached new heights, and a 33-year-old David Silva still pulled the strings.

Others have triumphed with a greater points tally, or won the Champions League too. But Arsenal’s undefeated title-winning campaign remains a truly remarkable achievement: the only incidence of this happening since the 19th century.

Undefeated runs are often characterised by resilient defences, but Arsenal were an incredible attacking unit boasting the speed of Thierry Henry, the creativity of Dennis Bergkamp and reliable goalscoring on either flank from Freddie Ljungberg and Robert Pires.

Gilberto Silva and Patrick Vieira provided the strength that Arsenal have lacked ever since, while Sol Campbell was the only natural defender in a backline featuring Ashley Cole, Lauren and Kolo Toure – three players converted from more attacking positions by Arsene Wenger, summarising his emphasis upon technical skill. Jens Lehmann is remembered for his blunders, but in his debut Premier League campaign he simply didn’t lose all season.

Arsenal boasted the league’s best attack and its best defence; they could dominate possession and counter-attack brilliantly in turn. There’s a reason why Arsenal’s “L 0”, rather than Chelsea’s “GC 15” remains the Premier League’s most revered statistic.

Some could argue it's “Pts 100”, though. Officially the greatest: by wins, goals, points, winning margin, goal difference and more.

Pep Guardiola needed a second season to take this team to phenomenal new heights, crafting a dominant, aesthetically pleasing side which swept all before them. Well, almost: Liverpool vanquished them, as did Manchester United – their only two defeats – and then the Merseysiders did so again in the Champions League quarter-finals.

It's an asterisk against Man City’s season, certainly, but really shouldn’t detract from their domestic achievements over the course of an exceptional campaign. They hit the magical 100-point mark with a glorious lob from Gabriel Jesus in the 94th minute of their final match of the season – and celebrated like they’d won the title all over again.

Quiz! Can you name the 50 players with the most Fantasy Premier League points in 2018/19?