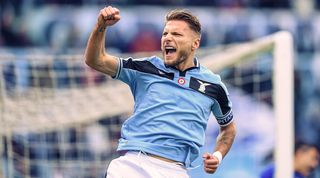 Sunday night sees one of the fiercest derbies in European football. It's the Derby della Capitale and the 190th edition of Roma vs Lazio at the Stadio Olimpico.

The rivalry stems back to the 1927 - the year AS Roma was formed. Fascist dictator Benito Mussolini merged three Rome clubs at the time together to create the red and yellow (Giallorossi) club we know today, in an effort to rival the dominance of sides from northern Italy.

SSC Lazio, who were formed 27 years earlier, refused to cooperate with the merger. A rivalry was born, with Lazio deemed by Roma fans as the outsiders of the countryside, or 'burini'  ('peasants').

Yet this season, Lazio feel like outsiders no more - in fact, they are building into becoming the prominent team of the region.

Lazio's stock has been growing for a while - and a glorious 2019 for 'I Biancolesti' has turned them into one of the most in-form teams on the continent.

After winning the Coppa Italia last May, the Biancolesti now sit six points behind Serie A champions Juventus, having played a game less. Roma sit seven points further back, in fourth.

Lazio beat Juve in the Italian Super Cup final in December with a 3-1 victory thanks to goals from Luis Alberto, Senad Lulic and Danilo Cataldi.

That result came just three weeks after they defeated the Old Lady by the same scoreline in Serie A, suggesting that Lazio possess all the necessary credentials to be named one of the top teams in Europe today.

Despite his side dominating the domestic scene over the past eight years, Juventus boss Maurizio Sarri did not hesitate to heap praise onto this particular Lazio side.

The former Chelsea boss said: "They [Lazio] are experiencing a magical moment of form right now. If they carry on like this, there's not much for anything else to do.

"For me, right now, physically and mentally, they are the best team in Europe."

Yet the double-dismantling of Juventus is not all that Lazio have got to show for themselves - I Biancolesti play and act like champions too.

If they haven’t powered past opponents, Lazio find a way to win late in the day.

In six out of their last eight Serie A matches, they have scored in the final ten minutes of matches to gain vital points, including two stoppage-time strikes at fellow high-flyers Cagliari in December and late winners in first two matches of the New Year against Brescia and Napoli.

You don’t need to search too deeply to realise that Lazio are a unique side. For a team that uses its never-say-die energy to fight to the end, you’d be surprised to hear that the majority of their first-team stars are in the twilight of their careers.

They are marshalled at the back by the experienced Stefan Radu, 33, and Francesco Acerbi, 31. Their midfield is engined by the likes of former Liverpool man Lucas Leiva, 32 and Marco Parolo, 34, while wing-back Lulic is one of their main sources of attack at 33 years old.

Another is former Manchester City striker Felipe Caicedo. The 31-year-old ‘super-sub’ has come up with some crucial goals for his side despite starting most of Lazio’s matches on the substitutes bench - including a 97th-minute winner at Cagliari and another stoppage-time clincher against Juventus in December.

Yet alongside Lazio’s experienced core lies world-class talent. Look no further than Ciro Immobile, who currently dominates the Serie A goalscoring charts with 20 goals in 19 matches so far this season.

Partnering Immobile up front is Argentine striker Joaquin Correa - a player currently in the form of his career after failing to meet the grade at Sevilla. The partnership between Immobile and Correa is supported by Sergej Malinkovic-Savic, the 24-year-old attacking midfielder linked with some of Europe’s most high-profile clubs over the last few years.

Lazio’s squad are not just aging and talented but humble too, with many of their squad emerging from the lower echelons of Italian football before peaking late in their careers.

Centre-back Francesco Acerbi is a prime example of this. At the age of 22, he was playing in the Italian fourth division with Pavia and rose quickly up through the divisions where he is now not only a high-flying Lazio but also having a purple patch for Roberto Mancini’s Italian national team.

Midfield engine Marco Parolo started his career in a similar fashion, not playing any Italian top-flight football until the age of 25. Wing-back Manuel Lazzarri too came from the Italian fourth division, beginning his career for amateur and semi-professional sides like Montecchio Maggiore, Delta Rovigo and Giacomense, before joining Lazio from SPAL earlier this year.

This unique collection of players are masterminded by Simone Inzaghi, the younger brother of AC Milan legend Filippo who has instilled a winning mentality amongst the Biancolesti players.

The highly-rated young manager was not even supposed to coach the club, but the swift departure of Marcelo Bielsa just two days after being announced as Lazio's manager in 2016 meant that the Italian was promoted from the youth team manager to first-team boss.

A member of Sven-Goran Eriksson's Lazio side who won the Scudetto in 2000, Inzaghi has both the know-how and the tactical prowess to succeed as a top-class manager.

His competencies as a tactician were clear to see during the Super Cup Final win over Juventus in Saudi Arabia, as his midfield substitutes - Parolo and Danilo Cataldi - were influential in the two second-half goals which won Lazio the trophy.

His memories of his club's most heated rivalry, however, will always be tainted by Roma snatching the Serie A title from the jaws of defending champions Lazio in 2001.

Though Inzaghi would do well to remember that Sunday's derby is not just an opportunity for the Biancolesti to put one over their fiercest rivals, it's the chance to showcase their credentials as Scudetto challengers once again.

In recent years, Lazio have been a club in the wilderness. Now, they have all the necessary weapons to become Italy's latest European heavyweight.

Roma vs Lazio will kick-off at 5pm on Sunday 26 January.