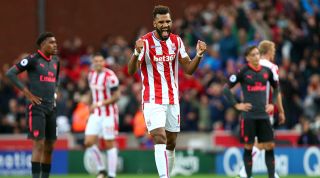 Stoke debutant Jese scored the only goal at the bet365 Stadium as Arsenal suffered in Staffordshire once again. The former Real Madrid man, who joined on loan from PSG this week, slotted home with a fine finish 90 seconds into the second half after Stoke had countered from a loose Granit Xhaka pass. A frustrated Arsene Wenger watched his side dominate for large swathes and then saw a late potential Alexandre Lacazette equaliser wrongly ruled out for offside – but the resolute Potters held firm to earn Mark Hughes's side their first three points of the campaign.

Initially this was not as easy as it would eventually sound, but it became another thoroughly impressive performance from Manchester United. After a close first half, Eric Bailly tapped home as the clocked ticked over 45 minutes, reacting quickest after Lukasz Fabianski tipped Paul Pogba's header onto the crossbar. Romelu Lukaku put the game beyond doubt 10 minutes from time, converting after Henrikh Mkhitaryan's smart pass, before Pogba notched a stylish third and Martial added the exlamation point with a cruel fourth.

For all the promise of this game, bringing together as it did a raft of technical players, it was of remarkably low quality.

Richarlison, arguably the game's best player on his first start, would eventually profit from good work between Nathaniel Chalobah and Andre Gray, prodding in the game's first goal 17 minutes before full-time. Etienne Capoue laced in a second from the edge of the box 15 minutes later, sealing the points for a Watford team who were marginally superior.

Football, as imagined by Tony Pulis. West Brom enjoyed very little possession at Turf Moor, seemingly content to let their opponents take all the risk with the ball. Inevitably though, one long ball was all it took: Hal Robson-Kanu reacted quickest to Matt Phillips' flick-on and finished at the near post with 20 minutes left - time enough for him to also be sent off for elbowing Matt Lowton.

Shinji Okazaki is the first player to score inside the opening minute of a Premier League match in 2017-18 (52 secs).

Mat Ryan's mistake meant that his side endured the toughest possible start on the road, with his fumble from Riyad Mahrez's shot allowing Shinji Okazaki to tap home with less than a minute played. When Harry Maguire headed in Mahrez's corner nine minutes after half-time, Chris Hughton will have known that his Brighton team would have another week to wait at least before winning their first Premier League points. The zero remains - and it needs to go sooner rather than later.

Sadio Mane has had a hand in five goals in six Premier League games vs Crystal Palace (four goals, one assist).

Palace are a side stuck between styles and Liverpool, obviously, have had a long week. It showed. Jurgen Klopp's team created little, their energy drained by Tuesday's trip to Hoffenheim, and had to rely on a scrappy, poked finish from Sadio Mane for the points. Not great, admittedly, but given their recent history against Palace it's a result they'll be more than content with.

Finally, Southampton score at St Mary's. Manolo Gabbiadini took just 11 minutes to end a six-game scoreless run at home; a sign of their quick improvement under Mauricio Pellegrino, but also an indictment of how flimsy West Ham (who lost Winston Reid to injury in the warm-up) currently are. Dusan Tadic doubled the lead from the penalty spot before half-time, with Javier Hernandez quickly pulling a goal back, but only after Marko Arnautovic had seen a straight red card for an elbow.

Nevertheless, the 10 men dragged themselves back into the game, with Hernandez reacting quite brilliantly to a Fraser Forster parry to volley in an equaliser - only for Lee Mason to award Southampton a contentious stoppage-time penalty which Charlie Austin converted. Another tough afternoon for West Ham.