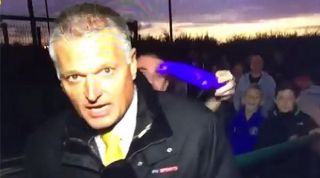 As anyone who’s witnessed Sky Sports News’ coverage will already know, there’s something about transfer deadline day which sends folk a tad sideways.

Goalkeeper Bain achieved a childhood dream at the beginning of 2018 when he signed for Celtic on transfer deadline day. Nothing particularly remarkable about that, you might think, until you learn that the Scotsman had already moved once during the same January window.

Bain had first been loaned from Dundee to Hibernian on New Year’s Day, but at the end of the month found his services requested by the Scottish Premiership champions. The offer was so last-minute that Bain turned up at Celtic Park in his Hibs tracksuit.

West Ham’s Diafra Sakho tried to take matters into his own hands to little avail in 2017. The Senegal international flew to France to undergo a medical at Rennes, despite the fact that he didn’t have West Ham’s permission or guarantee that they would be selling him at all.

The striker missed a Hammers training session thanks to his escapades and certainly wasn’t in any hurry to rush back upon his return to the UK. Indeed, first he visited Chelmsford Racecourse with his representatives, where he ended up winning £500 with a bet placed on his agent’s horse.

Sakho’s bizarre deadline day continued when he turned up for a meeting at the London Stadium that not one of West Ham’s big bosses attended. He got there in the end, though, eventually signing for Rennes the following transfer window.

In an era where many deadline day signings are unveiled via Twitter, the continued use of fax machines by the world’s biggest clubs seems relatively archaic. Indeed, that quintessential piece of 1980s office technology once ended up derailing what should have been a straight-forward shot-stopping swap between Real Madrid and Manchester United in 2015.

A dodgy fax machine at the former’s headquarters was allegedly to blame for the late paperwork which ultimately kept David de Gea and Keylor Navas at Old Trafford and the Bernabeu respectively, much to the latter’s frustration. Navas later admitted he burst into tears upon hearing the news while waiting to board a Manchester-bound flight.

Benjani Mwaruwari certainly made Manchester City sweat for his signature in 2008, only making the necessary medical required for his move from Portsmouth 45 minutes before the deadline.

The Zimbabwean had missed not one but two flights from Southampton to Manchester earlier that day, and a scheduled third was cancelled before he finally made it into the air. Initial reports suggested that a lengthy and untimely airport afternoon nap was responsible for the striker’s initial no-show, although some believed that his sudden bout of lethargy was simply a stalling tactic from a player reluctant to move north.

Harry Redknapp confirmed this was the case almost a decade later when he claimed that he literally had to push Benjani onto the plane.

FIFA might no longer be known for their law-abiding conduct, but they’re still sticklers for the rules when it comes to transfer deadline day – as Adrien Silva discovered to his cost.

The central midfielder was all set to complete his move from Sporting to Leicester for £22 million in August 2017, only for the relevant paperwork to arrive just 14 seconds too late. As a result, his official registration with the club was blocked.

Despite protestations from the Foxes and claims of forensic evidence which proved their punctuality, Silva was left in limbo for four months until he was eventually allowed to join his new team-mates… wearing the No.14 shirt. Hats off.

You have to feel sorry for the Sky Sports News reporters who have to spend the entirety of deadline day outside one ground. Not only are they repeatedly forced to fill airtime when absolutely nothing of any note has happened, they also have to deal with the army of excitable fans whipped into a frenzy by… er, not much at all.

Sky Sports News’ Gary Cotterill also had to deal with an unwanted presence during a report at Loftus Road in 2014. But instead of a sex toy, it was professional prankster Simon Brodkin posing as a fictional new signing for QPR, Jason Bent. The comedian joked that he’d signed “to play in the Premiership this season and in the Championship next season” for the west London club, who did indeed suffer relegation just nine months later.

However, Cotterill saw right through the façade, telling presenters back in the studio, “There’s a false thing that’s just happened here.” Just in case it hadn’t already been clocked.

You could be forgiven for thinking that Sky Sports had been duped good and proper in 2009 with the news that West Ham’s injury-prone and wholly unremarkable Julien Faubert had been loaned to Real Madrid.

The Frenchman had previously been sidelined for six months following a pre-season injury, and had only played eight games for the Hammers before the Spanish giants came calling.

But Faubert didn’t exactly make the most of his spell at the Bernabeu. He once missed training after believing he had the day off, appeared to fall asleep on the subs’ bench during a game against Villarreal (which he later denied to FFT) and spent a total of just 54 minutes on the pitch before heading back to Upton Park. Just Google 'Faubert Di Stefano'.

Believing that a deal from West Brom to QPR was very much on in 2013, Peter Odemwingie made the 125-mile solo trip from the West Midlands to west London, hoping to force through a move.

There was a slight hitch, though: the Nigerian hadn’t been told that his transfer relied upon winger Junior Hoilett agreeing to head in the opposite direction. When that deal fell through, so did Odemwingie’s.

Denied entry to Loftus Road, the forward was forced to suffer the ignominy of waiting outside the ground in the full glare of Sky Sports’ cameras while the whole mess unfolded. Odemwingie was later disciplined by WBA when he sheepishly returned with his tail between his legs.

COLUMN Marvin Sordell column: What it's like to be a deadline day signing in January – when it doesn't go right

Named after Ryan Babel’s mysterious antics in August 2010, the Babelcopter has become the stuff of transfer deadline day legend.

With Liverpool having turned down an £8 million offer from Birmingham during the previous window, the winger appeared determined to leave Anfield before the following one closed. The Dutchman was spotted taking a London-bound helicopter ride on D-Day itself, with both Spurs and West Ham reportedly interested in a deal.

However, no one saw the Babelcopter land, and by 6pm the player was back in Merseyside with his whereabouts in between remaining a mystery to this day.