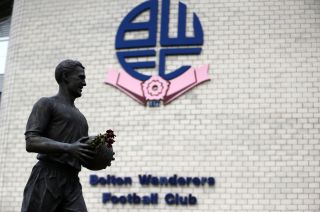 In 2008, Bolton Wanderers were officially one of the best 50 teams in all of Europe. After two seasons in the UEFA Cup - reaching the last 32 in 2006, then the last 16 two years later - they sat 47th in UEFA’s rankings. PSG were 66th. Atletico Madrid were 67th. Manchester City were 86th. Borussia Dortmund were 109th.

Today, Bolton are not even close to being one of the best 50 teams in England, let alone Europe. On Saturday, the club commenced a season in the fourth tier for only the second time in its 146-year history.

Ian Evatt’s side hosted Forest Green Rovers, starting just their fourth season in the Football League. Nailsworth, population less than 6,000, is the smallest town ever to produce a Football League club. And yet the visitors triumphed 1-0, thanks to a Carl Winchester goal. The new season may be only one game old, when the league table matters little. But Bolton sit 19th in League Two, 87th in the English pyramid. Below Harrogate Town. Below Salford City. Below Barrow.

In the club’s solitary previous season in the fourth tier, in 1987-88, Bolton never slipped lower than 16th, and secured instant promotion back to Division Three. This, then, is a historic moment for a founder member of the Football League. In the 132 years since 1888, the club has never been this low.

On Saturday, it was hard not to look around the empty University of Bolton Stadium, and think of happier times.

The night when a capacity crowd cheered to the rafters as Bolton beat Atletico Madrid in the UEFA Cup. The night when Jay-Jay Okocha scored two sensational free kicks to help Bolton thrash Aston Villa on the way to the League Cup final. The night when a prime Nicolas Anelka tore Arsenal to shreds in the Premier League.

There were many other games like it. Particularly during Sam Allardyce’s reign, even the finest of Premier League teams dreaded visiting what was then known as the Reebok Stadium.

This time, there was only silence, and League Two football. Behind-closed-doors fixtures are not unique to Bolton right now, and are happening for an essential reason - the town, after all, has been a coronavirus hotspot in recent days. At this moment, far more important things are happening than a mere football match.

But the depressed silence made the contrast with the glory days all the starker. A few onlookers watched on from the restaurant in the hotel adjoining the stadium, but this was as far removed from the Premier League years as it was possible to get.

Bolton played in the top flight for 11 consecutive seasons, but things fell apart when talisman midfielder Stuart Holden suffered a serious knee injury in March 2011. Owen Coyle’s team sat seventh in the Premier League table - weeks later, they lost 5-0 to Stoke in the FA Cup semi-final, then slumped to 14th by May. The following campaign brought relegation.

Back then, there was confidence that the club would only spend one season outside the top flight, but Bolton were 18th in October and Coyle was sacked. Dougie Freedman guided the club back to the play-off spots - only to overcomplicate things on the final day of the season, surprisingly handing a debut to young winger Rob Hall, when victory was needed. Bolton drew at home to Blackpool, and Leicester ousted them from the top six.

The club’s one and only chance of a Premier League return had gone. Davies began to rein back on investment, and Bolton finished 14th, then 18th, when Neil Lennon replaced Dougie Freedman mid-season.

If Lennon’s appointment had seemed a coup - a three-time title winner in his only previous job with Celtic - things went badly wrong in 2015-16. As Bolton reached the end of their parachute payments and attempted to cut the wage bill, while Davies tried to sell the club, Lennon found himself in a very different situation to the one he enjoyed at Celtic. The Northern Irishman grew increasingly frustrated, frequently digging out his players in post-match interviews.

At Celtic, where defeats were few and far between, those methods might have got the response he wanted. At Bolton, where defeats were almost weekly, dressing room morale seemed to plummet. Bolton hurtled towards relegation, as the club’s financial situation grew ever more worrying.

By the end of the campaign, Lennon had gone, and Ken Anderson had teamed up with former striker Dean Holdsworth to buy the club for £1. Bolton finished bottom of the Championship.

The slide appeared to have been halted a season later when new boss Phil Parkinson helped Bolton secure instant promotion from League One. But things were rarely far from the knife-edge, on and off the pitch.

Holdsworth had quickly departed, after falling out with Anderson. In the club’s first season back in the Championship, Parkinson’s team survived only thanks to two improbable goals in the last four minutes, at home to Nottingham Forest on the final day of the campaign.

In August 2018, just two years ago, Bolton actually sat third in the Championship, after three wins from their first four games of the new campaign. Some even dared to dream of a Premier League return, but it was the falsest of false dawns. Bolton hosted Sheffield United in the next game, lost 3-0 and never recovered.

They agreed a deal of close to £1m to sign Christian Doidge from Forest Green days later - initially on loan, with the move becoming permanent in January - but then almost slipped into administration within a fortnight.

Doidge had scored just one league goal by the time January came around, and Anderson refused to pay the money agreed, with Bolton’s finances falling into an ever deeper hole. Forest Green owner Dale Vince took Doidge back to Gloucestershire, and threatened legal action. So critical was Vince of Bolton’s unpopular owner, that he formed an unlikely alliance with Trotters fans - some even travelled to Nailsworth to support the League Two club in a game against Bury, as a gesture of thanks.

Back in Bolton, Anderson stopped paying the players’ wages, fan protests became a regular occurrence, and the club nosedived towards relegation again, scoring only 29 league goals all season. By the end of the campaign, Bolton weren’t even unable to fulfil their fixture list - a home match against Brentford was called off after unpaid players refused to play.

The administration and 12-point deduction that followed effectively ruined their League One campaign before it had even begun. New owners were lined up, but the takeover dragged into late August, by which point Bolton only had four senior players left to field. Kids stepped in and did their best, but the club lost four consecutive league games by five goals. A match against Doncaster was called off because Phil Parkinson felt the youngsters - many of them 16 and 17 - could not be expected to play three games in a week, for welfare reasons.

By the time the takeover finally happened, avoiding the fate that befell neighbours Bury, Parkinson had quit in frustration.

New boss Keith Hill had 48 hours from his appointment until the closure of the transfer window, in which to recruit an entire new team. Already 15 points adrift of safety, it was a monumental task to escape relegation, and Hill rarely convinced fans that he was capable of achieving it.

What followed was an inevitable march to relegation, any hope quickly extinguished after a 7-1 defeat at Accrington in November. When the pandemic hit with 10 games left, Bolton were bottom, 21 points from safety.

For a second season in a row, the club were unable to complete their fixtures, this time through no fault of their own. In some ways, the curtailed season was a relief, an early halt to the worst campaign in the club’s history. On the only previous occasion Bolton had dropped into the fourth tier, they’d at least finished fourth from bottom, losing a relegation play-off to Aldershot.

Now, they were joining a list that previously contained just six clubs - formerly of the Premier  League, but since relegated to League Two. After Swindon, Bradford, Portsmouth, Blackpool, Coventry and Oldham, the seventh name on the list is Bolton Wanderers. Most have not found it easy to bounce straight back.

For too long now, Bolton have been a club going through the motions - a shell of the club they used to be, going out on to the field to inevitably lose yet another football match, no matter what the opposition, no matter which division.

This summer though, there has been optimism that things will be different. Ian Evatt replaced Keith Hill as manager, bringing with him a track record of success from his previous job at Barrow, who he’d turned into a team nicknamed ‘Barrowcelona’, with a free-flowing style that made them champions of the National League.

The club quickly recruited Eoin Doyle, last season’s leading scorer in League Two, and attacking midfielder Antoni Sarcevic, a member of the League Two team of the year. At other clubs, eyebrows were raised, suggestions made that Bolton were overspending again. Evatt has strenuously refuted that, insisting that the club are working to a sensible budget. Many of his other signings have been significantly lower profile, and most made before the EFL introduced a salary cap for this season, as League Two copes with the financial implications of coronavirus.

Early on though, there have been teething problems. With a new team, a new 3-5-2 formation and a whole new way of playing, Bolton lost at home to Bradford in the Carabao Cup, then lost at home to Crewe in the EFL Trophy.

Against Forest Green, Bolton were largely poor throughout, looking like a collection of individuals who’d yet to form a team - not surprising given that the entire starting 11 was made up of new signings. Denied perhaps their greatest advantage, their sizeable fanbase at this level, they faced a visiting side who relished playing at arguably the most impressive stadium ever to host League Two football.

Three home defeats from three matches was not the start to the campaign that anyone wanted or expected. “We’ve got a lot of hard work to do,” Evatt said after the match. “I have to be a realist. For too long now, this club has been used to losing football matches. It’s a culture that needs to change.

“Also, we’ve got 17 or 18 new players - it’s not going to be fluid Brazil in the first week. We have to be patient, and believe in the process. Sooner rather than later, it’s going to turn.”

Bolton fans have been hoping for a change in fortunes for some time now. Clubs have turned things around and made it back to the top from the fourth tier before - Brighton, Burnley, Fulham and Wolves among them. Bolton did it themselves, needing just seven years to go from Division Four to the Premier League last time around.

But the road back from here will be extremely arduous. The days when Bolton were officially better than PSG, Manchester City, Atletico Madrid and Borussia Dortmund seem like a lifetime ago. For now, no matter the opposition, fans just want to remember what it’s like to win football matches again. It’s been too long.