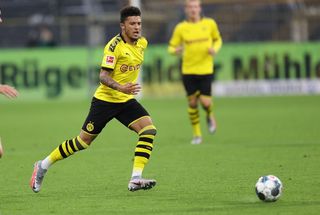 With football across Europe rushing to a finish and all sorts of theoretical obstacles standing in its way, nobody can be quite certain when the summer transfer period will actually happen.

Some certainties do exist though: when the current season finishes almost every team on the continent will have needs and weaknesses and, in addressing them, they will have access to scarcer resources than they would normally. Most likely, ‘scarcer resources’ will be a relative situation and, at the very top of the game, the most affluent clubs will continue to dig deep into their sovereign wealth funds, but – for everyone else – the premium will be on finding creative solutions and doing the best they can.

Which is interesting, and which, instead of the usual decadent spectacle, actually promises one of the most intriguing windows in years. Instead of just basic wealth, it will examine clubs’ processes and procedures and their capacity to plot a clear path through a cluttered market place.

Most obviously, it will shine a light on the mental agility of their coaching teams and their capacity to turn attributes into solutions. If, for instance, an upper mid-level Premier League team finds itself needing a new full-back this summer, it’s unlikely to be able to just spend £30m and acquire a 25 year-old with a perfect skillset – someone who can tackle, pass, defend and attack with equal ability.

Instead, they’ll have to be more imaginative. They’ll need to see the merit in potential over ready-made ability, viewing previously terminal flaws as problems which can be corrected over time. Rather than looking to the international market and signing a player who comes with more superficial assurances, they might – just for the sake of an example – identify the upside in someone like Brentford’s Rico Henry, reasoning that any doubts are outweighed by the player’s pliability over a two or three-year period.

A reasonable response to that is to say that clubs should always work in that way. That, if they were being truly efficient, their transfer activity would always be designed to achieve both maximum value and to complement the resources already at their disposal.

Maybe so, but that just isn’t the case – and primarily because, until now, it hasn’t needed to be. In the Premier League, the broadcasting contract alone has created such a forgiving environment, that – for a lot of clubs – these principles have been lost, or have at least become secondary to the importance of finding the ‘right’ player, right now.

Furthermore, it's clear by looking at the spending patterns of the lesser clubs, or even those recently promoted, that there isn’t a lot of caution in this world. Dozens of the deals struck over the past five years are suggestive of not only a collective ambivalence towards wastage, but perhaps a fundamental unsuitability to this changing world. If suddenly it is a big deal to spend an extra £5m on a player, there are a few clubs who are going to need to refine their processes.

And the remedy isn’t a simple as building a new training ground. Or employing a set of data scientists. It’s not even as easy as just finding the game’s most celebrated sporting director and giving him the biggest office, the biggest salary, and biggest remit. Instead, a club’s ability to perform to the sum of all those parts is a manifestation of its internal harmony – an audit of what is has and doesn’t have, certainly, but also a measure of just how well those assets work in concert.

It’s that micro detail that will make the summer so interesting. Club X may have the smartest analytics company available doing their scouting, but is that team able to communicate what they know well enough for it to be effective. And, even if that is the case and a sporting director is sold on the merits of a player dug out from beneath the game’s topsoil, does the club then have the staff and atmosphere required to polish that rough diamond and turn him into a viable first-team option.