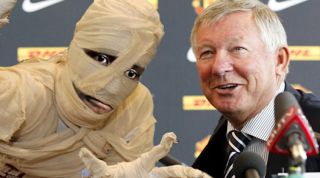 Chaotic scenes were witnessed at a Manchester United press conference today, as impending summer signing Wilfried Zaha, who was expected to be unveiled by the Premier League leaders, was instead unravelled, leaving him in a helpless spool on the floor.

Desperate club officials scooped up the Crystal Palace man in the shirt they had planned to present him with, and rushed him to the club's darning room. He faces a race against time to be returned to his previous state by the club's chief tailor ahead of his return to South London to complete the current season with the Eagles.

Until the thread tragedy, the unveiling had been proceeding as planned. As per tradition, Zaha had been seated on a stool under a big red curtain with a question mark painted on it, when a loose piece of material from the 20-year old's thighs caught on a nail.

Desperate officials tried to prevent the seam from undoing itself, but their efforts were in vain. Zaha, who had been expected to spend the rest of the season with Crystal Palace, will instead begin his rehabilitation programme in Manchester United's multimillion-pound sewing basket.

"It's a blow for the lad, and for everyone at the club," commented United manager Sir Alex Ferguson. "But I've seen Paul Scholes recover from a frayed pancreas, and we re-inflated Ronny Johnsen's metatarsal when everyone said it was hopeless. Fingers crossed, come next season he'll be fully mended."

Manchester United have set up a website for fans to donate unwanted pieces of thread, cloth and buttons that might help in Zaha's recovery. If necessary, however, puce-hued martinet Ferguson is thought to be ready to sacrifice Ashley Young, by picking apart the ex-Watford man with embroidery scissors in order to incorporate salvageable traces into Zaha.

All Back of the Net blogs >>